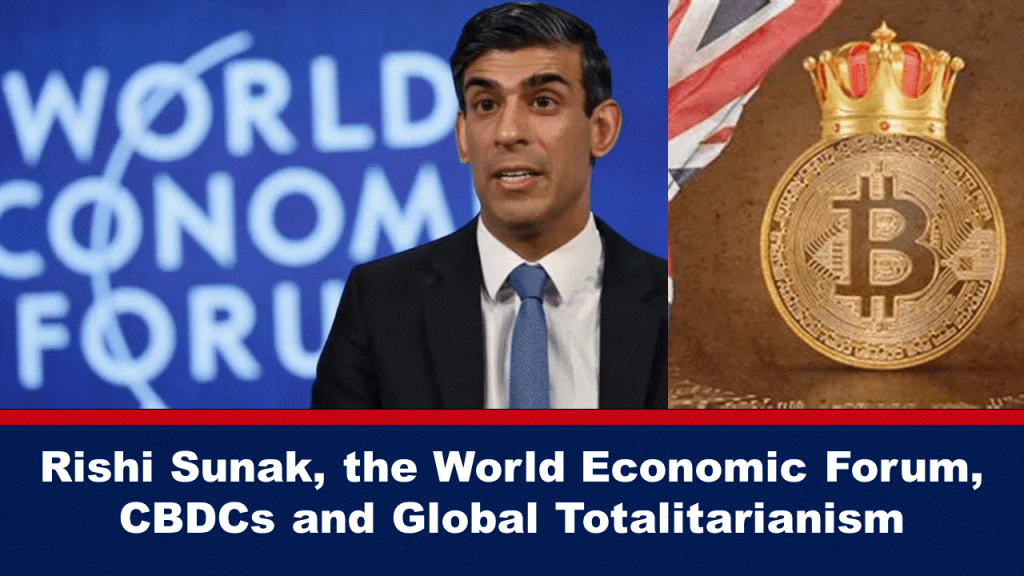 In July 2021, when Rishi Sunak was Chancellor of the Exchequer, the recently installed UK Prime Minister Rishi Sunak announced his plans to introduce an official digital currency to rival cash in the “biggest upheaval in the monetary system for centuries.”

Cash in people’s pockets would be superseded by a new “Bitcoin” digital currency in a plan being pushed by Chancellor Rishi Sunak.

In what Treasury insiders say would be the biggest upheaval in the monetary system for centuries, the Bank of England would establish a direct digital equivalent to physical money and take control of it in the same way as sterling.

The previous month, in June 2021, the UK government confirmed it is playing a leading role in global artificial intelligence (“AI”) ethics and regulations and that it published Guidelines on AI Procurement in collaboration with the World Economic Forum (“WEF”) Centre for the Fourth Industrial Revolution.  Do you think the Fourth Industrial Revolution or King Charles III’s Great Reset is for our benefit?  Do you think AI will be a key feature in central bank digital currencies (“CBDCs”)? Do you think CBDCs are for our benefit?

Sunak’s wife, Akshata, is the daughter of the Indian billionaire NR Narayana Murthy who founded the software company Infosys. Infosys is listed as an official partner of WEF and, as The National Pulse reported, is accused of seeking to develop the technological infrastructure to implement a global social credit score system.  In 2018, Infosys published a white paper ‘Rethinking Credit Lending’.  Starting on page 5, it describes how they intend to use social media activity, location, shopping, and other behavioral indicators to assess “credit risk,” which sounds very much in line with the Chinese social credit scoring system.

The new British Prime Minister’s links to the WEF do not end with his family’s business. Sunak himself is a WEF puppet. The video below by Philosophical Investigations (aka The New World Order Сommunity) demonstrates the ease with which globalists can appoint government members.

The major conclusion, wrote Philosophical Investigations, should be that the attempted implementation of NetZero, the Paris Agreement, UN Agenda 2030, and Globalisation in general, will eventually fail. But in the meantime, it will have a catastrophic impact on the West.

Philosophical Investigations: How Rishi Sunak was Groomed by Globalists, made a Puppet of the WEF and appointed UK Chancellor, 2 April 2022 (16 mins)

Australia’s central bank is trialing a digital currency to explore “innovative ways” for homes and businesses to make payments and transfer funds. The Reserve Bank of Australia said the project would explore the potential economic benefits of introducing a CBDC. [Economic benefits to whom?]

More than 100 countries, including 19 G20 nations, are now exploring central bank digital currencies (CBDCs). [There are 196 independent sovereign nations in the world.]

The central banks issuing and managing these digital currencies are national financial authorities that oversee a country’s currency, supply of money, and monetary policy.

They can hold the digital currency either in an account with the central bank, or as electronic tokens, the World Economic Forum explains in its Central Bank Digital Currency Policy‐Maker Toolkit. The electronic tokens could be held on mobile devices, prepaid cards, or other forms of digital wallets. [No!]

What is the Forum doing to improve the global banking system?

The World Economic Forum’s Centre for the Fourth Industrial Revolution Network has built a global community of central banks, international organizations, and leading blockchain experts to identify and leverage innovations in distributed ledger technologies (DLT) that could help usher in a new age for the global banking system.

We are now helping central banks build, pilot, and scale innovative policy frameworks for guiding the implementation of DLT, with a focus on central bank digital currencies (CBDCs). DLT has widespread implications for the financial and monetary systems of tomorrow, but decisions about its use require input from multiple sectors in order to realize the technology’s full potential.

What are central bank digital currencies? World Economic Forum, as updated in October 2022

Here’s the reality of what a central bank digital currency will mean for you:

Click on the image below to watch the video on Bitchute:

For a CBDC to take effect, commercial banks will largely cease operations, or close altogether, as everything and everyone comes under the direct control of central banks.  If it doesn’t seem to make sense that they would destroy their own businesses to bring about this sinister plan then consider what John Todd warned about over 40 years ago.

At the end of this article under the section “further reading,” we have listed some of our previous articles which indicate how centralized control will impact every aspect of our lives without our permission and it will be done stealthily.  You may think this sort of totalitarian one-world system will be implemented somewhere far away at some time in the distant future but they are forging ahead – now and everywhere.

As a microeconomic example, we remind you of action taken against The Exposé over the years which demonstrates they are continuously testing, implementing, and preparing the public to accept, or capitulate to, the totalitarian control of a cashless society that is beholden to an all-encompassing centralized digital currency.

PayPal has banned The Exposé from using its services numerous times causing massive disruption to its continuing existence – which is the aim behind PayPal’s coordinated attack on our freedoms.

For example, in January PayPal defunded The Exposé, and in April PayPal closed The Exposé’s account. And, just like Big Tech censorship, it is not only The Exposé PayPal has honed in on.  In another example of immoral behavior control, in September PayPal blocked the account for the parents’ group UsForThem.

And there are no signs of the tyranny letting up.  Last weekend The Exposé’s account was frozen and the balance of donations in the account was “temporarily” blocked.

The thousands of such individual actions across the world – aiming to remove our individual rights and freedoms – that began in earnest from the beginning of the Covid era have been moving us step-by-step closer to the implementation of their final goal – technocratic totalitarianism under a one-world government.  Fight back.

UK Government is colluding with the WEF on Artificial Intelligence for The Great Reset, 29 December 2021

Human Augmentation Will Be the Death of Humanity, 30 January 2022

The Plan for The UK To Become a Global Cryptoassets Hub May Not be As Bold as It Seems, 18 April 2022

There exists an Agenda to implement Global Totalitarianism based on Technocratic & Transhumanist Ideologies, 13 June 2022

Digital ID Tyranny is being Rolled Out Across the World, 9 August 2022

Across the World, Digital IDs and Digital Currencies Are Coming Unless We Put a Stop to Them, 24 September 2022

The Smart Money Nightmare: What Life Without Cash Could Mean for You, 11 October 2022

How Businesses are softening up the Public for a Chinese-Style Social Credit System, 26 October 2022