A new study published on Researchgate provides further proof that the Covid-19 injections cause recipients to develop crippling Acquired Immunodeficiency Syndrome because it shows the unvaccinated have the lowest rate of developing the serious disease due to Covid-19.

For months on end, Governments have been publishing data that strongly suggest the Covid-19 injections damage the immune system so much that recipients are developing some new form of Acquired Immune Deficiency Syndrome (AIDS). The most reliable example of this has come from the UK Health Security Agency (UKHSA).

The following chart shows the Covid-19 vaccine effectiveness among the triple vaccinated population in England in the Week 3, Week 7, and Week 13 UKHSA Vaccine Surveillance reports of 2022: 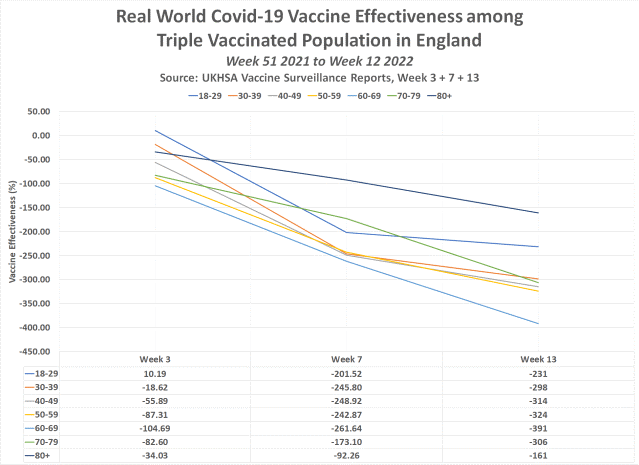 This is nowhere near the claimed 95% effectiveness by Pfizer, is it? 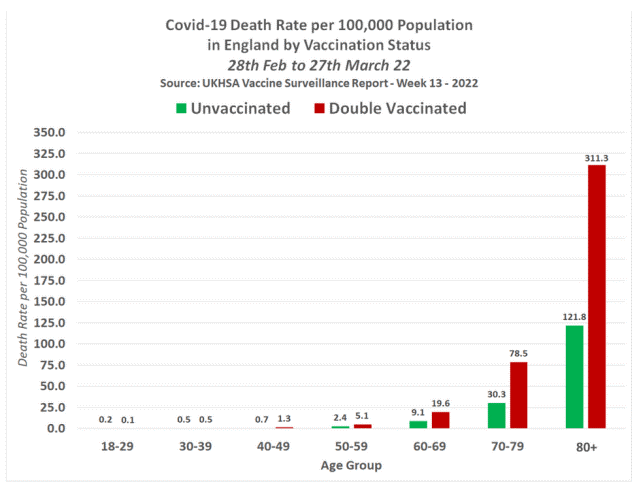 The Covid-19 vaccines instruct the body to produce the spike (S) protein of the original Covid-19 virus. The immune system is then supposed to rid the body of these manufactured spike proteins and remember to do so if it ever encounters the “real” virus in the future.

But now a further study adds more weight to this actually being the case, because the study has found that people who did not get the vaccine had a lower rate of suffering severe COVID-19.

The survey uploaded to the preprint server ResearchGate presented data from more than 18,500 respondents from the “Control Group” project with more than 300,000 overall participants. An analysis revealed that compared to those who got jabbed, unvaccinated people reported fewer hospitalizations.

The international survey also found that the unvaccinated people from more than 175 countries were more likely to self-care to prevent and manage COVID-19 infection. They used natural products like vitamin D, vitamin C, zinc, quercetin, and drugs, such as ivermectin and hydroxychloroquine.

Many participants experienced discrimination for refusing the administration of “genetic vaccines” and struggled with mental health burdens due to the stigma in the mostly “vaccinated” society.

Since the participants were self-selected and self-reported, the survey findings had to be interpreted with care compared to statistics or studies based on randomly selected populations, according to the Alliance for Natural Health International.

The participants admitted to avoiding vaccines due to their preference for natural medicine interventions and skepticism of pharmaceutical interventions. They also voiced distrust of government information and fear of the possible adverse effects of the vaccines in the long run.

The survey was conducted from September 2021 through February 2022. During the period, participants experienced mild to moderate COVID-19 infection and were infrequently hospitalized.

A number of female participants suffered menstrual and bleeding abnormalities, prompting the researchers who analyzed the data to surmise that the issues might have been caused by spike protein exposure and shedding.

Data collected from the survey were analyzed and interpreted by an independent, international team of scientists led by Robert Verkerk, Ph.D., the founder, and executive and scientific director of Alliance for Natural Health International.

The vast majority (98.8%) of non-COVID-19 injected participants were from 6 major continents or regions (Table 1), most being from Europe (40%), with the next largest constituents from Oceania (principally Australia and New Zealand) and North America (the USA and Canada), 27% and 25%, respectively. 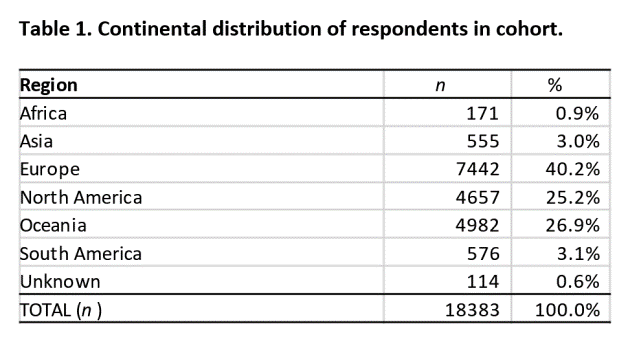 Table 3 of the study lists, in descending order of frequency, the most important reasons given by cohort respondents for deciding against COVID-19 injection. Respondents were able to select multiple reasons if they felt them be of equal importance: 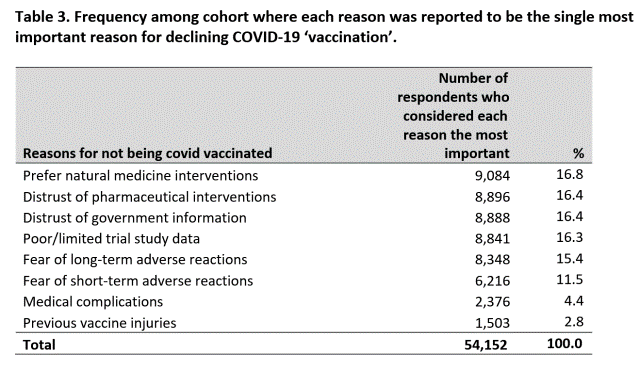 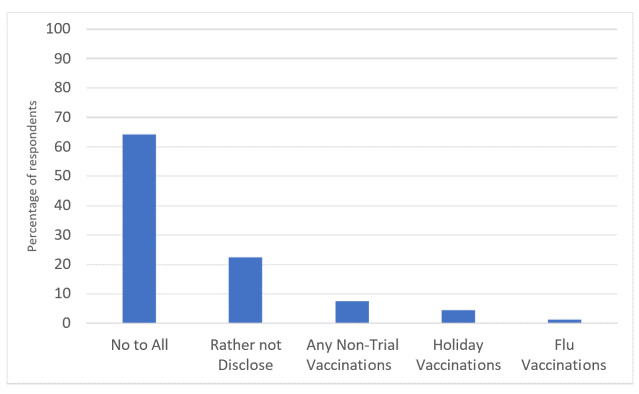 Respondents between the ages of 20 and 49 years reported the greatest incidence of COVID-19 disease (~10-12%), with females consistently reporting slightly more often than males regardless of age group, this likely reflecting the female bias of the cohort. Those aged 70 and over reported the lowest incidence of COVID-19 disease (4.0% females, 3.7% males) : 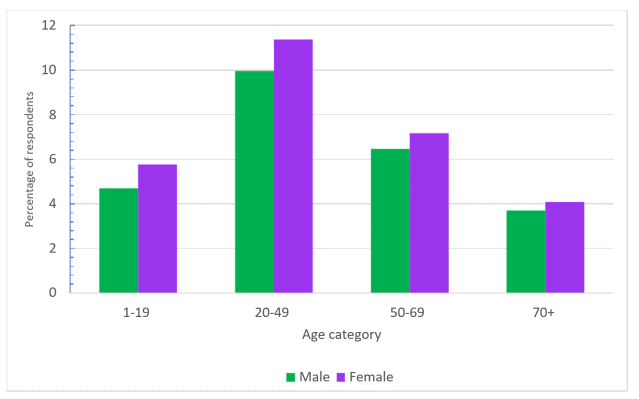 The greatest incidence of reported COVID-19 disease was in January 2022, with a clear escalation that mirrors the generalized, global displacement of the dominant circulating SARS-CoV-2 variant from delta to omicron, especially during the European winter (where respondent numbers were greatest): 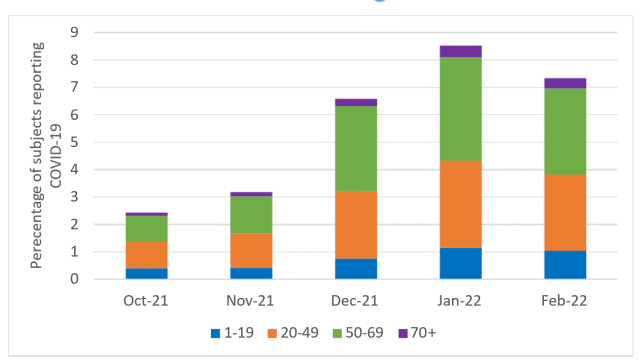 One quarter (25.1%) of the survey cohort reported some symptomatic disease (n = 4636) at some stage during the survey period, most (~14%) being mild, around 8% reportedly moderate, and just 2% with severe disease (Fig. 12). Some 3% reported asymptomatic disease. The 50 to 69 age band reported the highest incidences of disease of all severities: 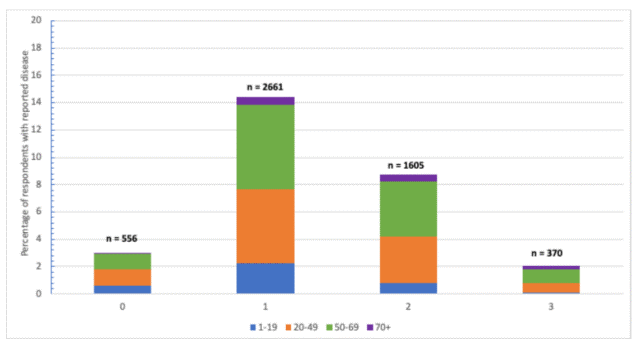 ‘Fatigue’ was the most commonly reported symptom of COVID-19 disease, closely followed by ‘cough’ and ‘muscle or body pain’:

Only 74 respondents out of the 5196 (1.4%) who reported suspected or known SARS- CoV-2 infection also reported that they were hospitalized following infection. Therefore, outpatient or inpatient hospitalization was reported in just 0.4% of the full survey cohort.

But these figures represent an overestimate as in some cases, a single individual made more than one visit to the hospital.

There were also significant numbers of reports of unusual bleeding among the non-COVID-19 ‘vaccinated’ women in the cohort, particularly those in the age band, representing the highest proportion of menstruating women, ages 20 to 49.

The most commonly reported named menstrual abnormality was irregular periods (1,210 reports) among the 20 to 49-year age band, this representing 36% of women in the age band: 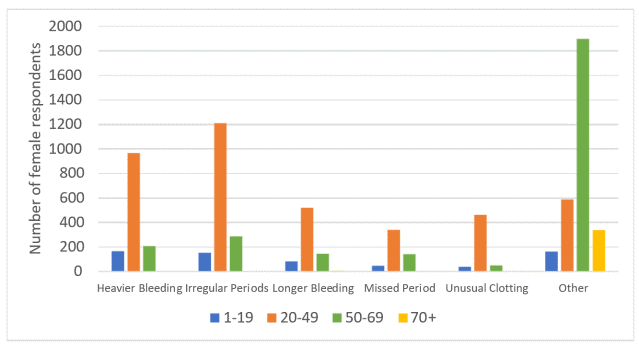 Additionally, 12.0% of female respondents reported unusual nosebleeds during the course of the survey, compared with 4.7% of men. This difference between females and males was even more pronounced for reports of unspecified unusual bruising, which was reported by 12.7% of females, but just 1.7% of males (all age groups).