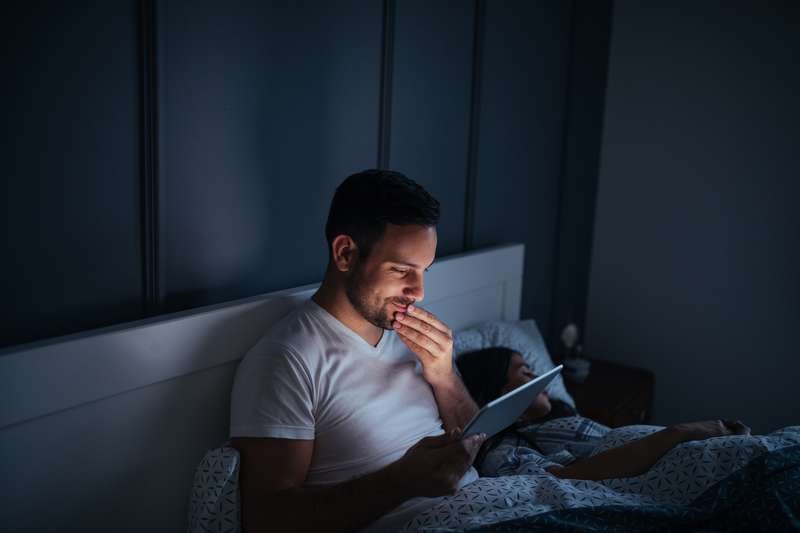 One of the multiple reasons why melatonin production is significantly suppressed in man today is blue light, radiating from screens from laptops, PCs, and phones

Melatonin, a vital hormone synthesized by the pineal gland, has been implicated in various physiological functions and in circadian rhythm regulation. Its role in the protection against the non-ionizing electromagnetic field (EMF), known to disrupt the body’s oxidative/anti-oxidative balance, has been called into question due to inconsistent results observed across studies. This review provides the current state of knowledge on the interwoven relationship between melatonin, EMF, and oxidative stress. Based on synthesized evidence, we present a model that best describes the mechanisms underlying the protective effects of melatonin against RF/ELF-EMF-induced oxidative stress. We show that the free radical scavenger activity of melatonin is enabled through the reduction of the radical pair singlet-triplet conversion rate and the concentration of the triplet products. Moreover, this review aims to highlight the potential therapeutic benefits of melatonin against the detrimental effects of EMF, in general, and electromagnetic hypersensitivity (EHS), in particular.

Melatonin has many other remarkable properties that make it a treatment for much more than sleep disruptions and restore jet lag.

It protects the brain, heart, and digestive system. It also has important role in tackling cancer. So much so that one group of scientists describes melatonin as “a Full-Service Anti-Cancer Agent.”(1)

In 1958, scientists discovered that melatonin, derived from the amino acid L-tryptophan, is produced within the brain’s pineal gland at night.

For this reason, it’s sometimes referred to as the ‘hormone of darkness,’ producing physiological changes that help induce sleep, such as reducing body temperature and breathing rate.

But its role goes well beyond this. Melatonin is not only a hormone but a cell protector that’s produced all over the body, impacting almost every cell. For instance, the gastrointestinal tract produces more than 500 times as much melatonin as the pineal gland.

Melatonin plays multiple roles in the immune system and has powerful antioxidant and anti-inflammatory properties. Because it can dissolve in both lipids (fats) and water, melatonin easily crosses cell membranes and can even traverse the blood-brain barrier.

But melatonin’s most important talent may be the prevention and treatment of cancer and it is backed by approx. 2,000 studies

The role of melatonin in cancer has been thoroughly evaluated, with ca. 2,000 scientific papers published during the last half-century.

Scientists have proposed multiple means by which melatonin interferes with the growth of experimental tumors in lab studies. A dozen processes have been put forward, and another dozen potential mechanisms have been suggested.

A research group from the University of Texas, writing in the International Journal of Molecular Sciences in 2017, found it “perplexing” that one compound can act in so many ways to restrain cancer development.

They suggested such a diverse range of actions may actually be secondary to a more fundamental process that has yet to be identified. (2)

Here’s a brief list of some of the key mechanisms by which melatonin acts against cancer:

Strong free radical scavenger. This helps protect DNA from damage and mutation and thereby prevents cancer from getting started in the first place. It also promotes the expression of antioxidant enzymes and reduces the activation of pro-oxidant enzymes.

Acts as a pro-oxidant. Like vitamin C, which is an antioxidant at low levels and a pro-oxidant at high levels, melatonin can generate free radicals to directly kill tumors.

Limits the cellular uptake of linoleic acid. This omega 6 fat gets converted into a molecule that promotes the proliferation of cancer. This is of particular interest these days because the standard American diet contains far higher volumes of this fat than our ancestors ate.

Inhibits the activity of telomerase in human breast cancer cells. Telomeres are fragments of DNA that protect the ends of chromosomes. In healthy cells, they become shorter each time a cell divides until the cell is no longer able to divide — and growth stops. Cancer cells avoid this process of natural cell death by producing the enzyme telomerase, which repairs telomeres and enables cancer cells to keep dividing without limit.

Regulates body levels of estrogen and growth hormone. These are critical hormones in cancer development.

The bulk of the research on melatonin has been in breast cancer. Not only does it act through multiple mechanisms and pathways, but observations in the lab are supported by a couple of important facts about cancer risk: Breast cancer is more common in middle and older age groups, who suffer from declining melatonin levels, and breast cancer risk is likewise higher in women who are repeatedly exposed to light at night (such as those who work the night shift).

Other cancers studied have been ovarian, pancreatic, liver, colorectal, lung, bone, brain, prostate, and leukemia. In each instance, the researchers found positive evidence for the anti-cancer action of melatonin.

Melatonin not only reduces the toxicity of conventional drugs and increases their effectiveness, but remarkably, it makes cancers that are resistant to treatment with radiotherapy and chemotherapy become more sensitive to those treatments.

Scientists don’t know the reason for this, but they think it’s related to the fact that cancer cells have poorly functioning circadian rhythms or clocks and melatonin might help stabilize them.

Scientists of the University of Texas were perplexed about the amazing versatility of melatonin. I should add that they also raised a question: Why is it not used in regular cancer therapy?

They found the evidence “overwhelmingly convincing” for its use, especially as it “lacks any notable toxicity or negative side effects at virtually any dose.”

They suggested a reason that readers of this newsletter are familiar with: it’s inexpensive and non-patentable, so there are no financial gains to be reaped from its use. The Texas team laments that the National Institutes of Health minimally support studies even when many demonstrate substantial cancer inhibition.

A review of human studies carried out by researchers at the University of Copenhagen, Denmark in 2015 found that melatonin, when used with chemotherapy, increased survival and reduced toxicity in every case.

They wrote, “Melatonin significantly improves complete and partial remission as well as the one-year survival rate by around 50%.”(3)

Joint author Mogens Claesson said, “It seems that melatonin may be an inexpensive and very effective cancer treatment.”

Last year, a research group from China published its findings after analyzing 20 randomized controlled trials. Participants in the trials suffered from a variety of metastatic solid tumors i.e. advanced cancer.

The Chinese researchers found the combination of chemotherapy and melatonin doubled the remission rate to 15.57%, compared to 7.07% for chemo alone.

The figures for overall survival likewise doubled, 28.24% versus 14.19%. The duration of most trials was one year and patients usually took a 20 mg pill at night. (That’s a much larger dose than one would use as a sleep aid.)

Their conclusion was that melatonin “can effectively improve the remission rate and overall survival rate of tumor patients while reducing the incidence rate of neurotoxicity, thrombocytopenia [low blood platelet count], and asthenia [lack of energy] during chemotherapy.”(4)

Safe even in high doses

One doctor who has been championing the use of melatonin for some years is Frank Shallenberger, MD, a pioneer and leader in the field of integrative medicine based in Carson City, Nevada.

He suggests patients with cancer should take high doses as the “safety data on melatonin is astounding.” According to Dr. Shallenberger, nobody has ever discovered a toxic dose.

He reveals, surprisingly, that many leading melatonin researchers take 100 mg a day themselves for preventative purposes and that he routinely prescribes anything from 60 to 200 mg a day for his own cancer patients. (5)

In the Gorter Model, Melatonin is used in all kinds of cancers and stages but usually at 10mg per day at bedtime.

These seem like staggeringly high doses considering no more than three mg is usually taken to induce sleep – and often much less. The highest dose used in published human cancer trials was 20 mg.

When scientists first tested the effects of vitamin C, they used 100 mg. They thought this was high because it was ten times the amount needed to prevent scurvy. We now know 100 mg is a very small dose. Perhaps melatonin is in the same category and could be safely used in much higher amounts.

Dr. Gorter: my objections to extremely high and non-physiologic dosages of Melatonin is because melatonin is a hormone with multiples (in part unknown) ripple effects. On the other hand, Vitamin C. is a food supplement and the organism is much better apt to deal with large doses of this vitamin.

This is supported by a review carried out by scientists in Denmark in 2016. They wrote:

“In general, animal and human studies documented that short-term use of melatonin is safe, even in extreme doses. Only mild adverse effects, such as dizziness, headache, nausea, and sleepiness have been reported. No studies have indicated that exogenous melatonin should induce any serious adverse effects.