Bipolar ionization is experiencing a recent surge in popularity as the coronavirus pandemic triggers concerns about air quality.

Integrated into ventilation and air-conditioning systems, the technology utilizes specialized tubes that take oxygen molecules from the air and convert them into charged atoms that then cluster around micro-particles, surrounding and deactivating harmful substances like airborne mold, bacteria, allergens, and viruses.

They also attach to expelled breath droplets and dust particles that can transport viruses, enlarging them so they’re more easily caught in filters. It is an active process that provides continuous and complete disinfection.

“The ions produce a chemical reaction on the cell membrane surface that inactivates the virus,” Philip Tierno, clinical professor of microbiology and pathology at the NYU School of Medicine. “It can reduce 99.9% of all microbes in a matter of minutes.”

Even published by the NIH, there are literally hundreds of peer-reviewed studies showing the huge benefits of ionization of the air in rooms, nursing homes and hospitals, etc.

Bipolar ionization has been used in healthcare for many years for many applications. Dr. Gorter: I believe bipolar ion systems will become a standard in these critical environments to protect patients and staff in the USA and the EU.

In the US, terminals at LaGuardia, O’Hare, LAX, and San Francisco International Airports already have ionizing air units in place. Tampa’s Amalie Arena and the TWA Hotel at JFK airport are adopting bipolar ionization technology, as are large workplaces such as Google’s headquarters in Chicago and San Jose.

There are also options for the home, including standalone portable devices and additions to HVAC systems.

Recently, in The Netherlands, the representatives of both the Eerste Kamer (Upper House, Senate) with 75 members and the Tweede Kamer (Lower House, Congress, Bundestag) with 150 members (and public galleries)   installed in their meeting halls bipolar ionization equipment to kill 99,9% of ALL possible viruses; including all Corona viruses.

Unfortunately, this was a well-kept secret and the cabinet refused to install this equipment in hospitals, nursing homes or at airports. It has been a conscious decision to go for lockdowns and universal vaccinations instead.

By the use of a modified ionizer device we describe effective prevention of airborne transmitted influenza A (strain Panama 99) virus infection between animals and inactivation of virus (>97%). Active ionizer prevented 100% (4/4) of guinea pigs from infection. Moreover, the device effectively captured airborne transmitted calicivirus, rotavirus and influenza virus, with recovery rates up to 21% after 40 min in a 19 m3 room. The ionizer generates negative ions, rendering airborne particles/aerosol droplets negatively charged and electrostatically attracts them to a positively charged collector plate. Trapped viruses are then identified by reverse transcription quantitative real-time PCR. The device enables unique possibilities for rapid and simple removal of virus from air and offers possibilities to simultaneously identify and prevent airborne transmission of viruses.

There is an urgent need for simple, portable and sensitive devices to collect, eliminate and identify viruses from air, to rapidly detect and prevent outbreaks and spread of infectious diseases. Each year, infectious diseases cause millions of deaths around the world and many of the most common infectious pathogens are spread by droplets or aerosols caused by cough, sneeze, vomiting etc.2,3,4,5. Knowledge of aerosol transmission mechanisms are limited for most pathogens, although spread by air is an important transmission route for many pathogens including viruses6.

Today, no simple validated technology exists which can rapidly and easily collect viruses from air and identify them. The problem is not the analyzing technique, since molecular biological methods such as real-time PCR enable a sensitive detection system of most pathogens. The difficulty is to develop an effective sampling method to rapidly collect small airborne particles including viruses from large volumes of air. Furthermore, the sampling method should be robust with easy handling to enable a wide distribution and application in many types of environment. At present, the most commonly used techniques aimed to collect pathogens from air are airflow and liquid models. These systems are complex, and their efficiency has not been thoroughly evaluated.

Spread of infectious diseases in hospitals can be most significant. In many situations, there is a need for a pathogen- and particle-free environment, e.g. in operation wards, environments for immunosuppressed patients as well as for patients with serious allergies. This makes it desirable to have a method not only for collection and identification, but also for eliminating virus and other pathogens from air. Ozone gas has been shown to inactivate norovirus and may be used in empty rooms to decontaminate surfaces, however in rooms with patients ozone should not been used due to its toxicity. Generation of negative ions has previously been shown to reduce transmission of Newcastle disease virus and several kind of bacteria in animal experimental set-ups.

The ionizing device used in this study operates at 12 V and generates negative ionizations in an electric field, which collide with and charge the aerosol particles. Those are then captured by a positively charged collector plate. For safety reasons, the collector plate has a very low current, less than 80μA, however the ionizer accelerates a voltage of more than 200,000 eV, which enables high production of several billion electrons per second. Moreover, this device does not produce detectable levels of ozone and can thus be safely used in all environments.

This technique of ionization of the air is known to effectively collect and eliminate cat-allergens from air. Aerosolized rotavirus, calicivirus and influenza virus particles exposed to the ionizing device were attracted to the collector plate and subsequently identified by electron microscopy and reverse transcription quantitative real-time PCR techniques. Most importantly, we demonstrate that this technology can be used to prevent airborne-transmitted influenza virus infections effectively in any space; including hospitals and home for the elderly.

Visualization and efficiency of aerosol sampling were determined by electron microscopy

To develop and validate the ionizing technique for collection and identification of viral pathogens, we used several viruses of clinical importance; calicivirus, rotavirus and influenza virus (H3N2, strain Salomon Island) as well as latex particles. Canine calicivirus (CaCV, strain 48) was used as a surrogate for human norovirus, the etiological agent behind the “winter vomiting disease”, causing outbreaks of great clinical and economic importance. Rhesus rotavirus was used as a surrogate marker for human rotavirus.

The device (Fig. 1) consists of a small portable 12 volt operated ionizer, with a collector plate of positive charge attached to the ionizer, attracting negative particles from the air by electrostatic attraction. To determine optimal time collection parameters, latex particles with sizes ranging from <1 to >10 μm were nebulized into a room of 19 m3. Testing revealed that 40–60 min was required to eliminate >90% of free latex particles in the air as determined by real-time particle counting (PortaCount Plus). The particle counter can detect particles with size greater than 0.02 μM. Visualization by scanning electron microscopy (SEM) on grids from active- and inactive ionizer collector plates showed that accumulation of latex particles was dramatically enhanced on active ionizer collector plates compared to the inactive (Fig. 1). Next, high numbers of rotavirus and formalin-inactivated influenza virus were aerosolized under the same conditions. While, after 40 min the inactive collector plates contained few (<5) rotavirus and influenza virus, the active collector contained >50 virus particles, as determined by transmission electron microscopy (TEM), (Fig. 1). 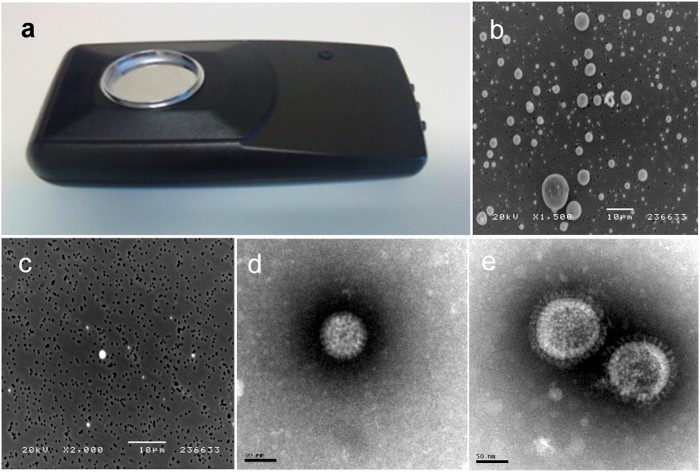 Figure 1: Airpoint ionizer with collector plate (size 13 × 35 cm) (a). The ionizing device was developed based of the Ion-Flow Ionizing Technology from LightAir AB, Solna, Sweden and was modified by installing a plastic-cup with a conductive surface of 47 mm in diameter, with positive charge, as the collector plate; Aerosolized and trapped latex particles (>1 to <10 μm) on active (b) and inactive (c) ionizer, (bar = 10 μM); Rotavirus (d); and influenza virus (H1N1; strain Salomon Island) (e) trapped on active ionizer, (Bar = 50 nm).