Gates and Fauci Back Down on Vaccine Promises

Bill Gates and the World Health Organization (see video) say they have strong confidence in the two leading COVID vaccines: the AstraZeneca (Oxford) vaccine the Moderna vaccine. Gates is invested in both. Their endorsement of these two lemons should worry anyone hoping that Operation Warp Speed, its billionaire patron and global regulators are capable of yielding a safe or effective shot. 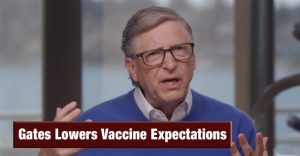 Since February 2020, the duo Bill Gates, Anthony Fauci, and the WHO have been promising a jab that will induce immunity in 7 billion people, prevent transmission, and impose minimal to no side effects. Their current race to lower expectations cannot keep pace with the poor performances of their troubled products. Gates is now hinting that the vaccine may not prevent transmission. Fauci will now settle for 70% immunity (see video.)

Moderna skipped animal trials altogether, and then saw 20% of the high-dose group and 6% of low-dose group experience serious adverse events (Grade 3 in the WHO definition) in its Phase-1 human trial; the victims needed ICU admissions to deal with their side effects and no details were ever given. But about the number of study participants with Grade 2 en Grade 1 toxicities were not revealed. Following these dismal results, Moderna CEO Steve Bancel and four other executives in the company dumped more than $89 million in stock.

Moderna said the NIH will soon run more studies to allow for human testing, with plans to start clinical trials in the US. Moderna did not specify a development timeline.

Both pathetic vaccines share a sole hope: They are both too big to fail. The Oxford jab got 140€ million from the British government, and is already manufacturing billions of doses. Moderna got $500 million from Fauci and has 2 billion doses in production.  Poor us!

The world is creating this vaccine on a historically fast and risky timeline.

Although eighteen months might sound like a long time, this would be the fastest scientists have created a new vaccine. Development usually takes around five years. Once you pick a disease to target, you have to create the vaccine and test it on animals. Then you begin testing for safety and efficacy in humans.

Safety and efficacy are the two most important goals for every vaccine. Safety is exactly what it sounds like: is the vaccine safe to give to people? Some minor side effects (like a mild fever or injection site pain) can be acceptable, but you don’t want to inoculate people with something that makes them sick or disabled for life.

Efficacy measures how well the vaccine protects you from getting sick. Although you would ideally want a vaccine to have 100 % efficacy, many do not. For example, this year’s flu vaccine is around 45% effective at best.

In laboratories, before testing on humans, various animals are exposed to the vaccine-in-development and observed for possible toxicities.

Ideally, to test for safety and efficacy, every vaccine goes through three phases of trials:

Phase-I is the safety trial. A small group of healthy volunteers gets the vaccine candidate. You try out different dosages to create the strongest immune response at the lowest effective dose without serious side effects.

Phase-II: once scientists have settled on a formula, you move onto phase II, which tells you how well the vaccine works in the people who are intended to get it. This time, hundreds of people get the vaccine. This cohort should include people of different ages and health statuses.

Then, in phase-III, one gives it to thousands of people. This is usually the longest phase, because it occurs in what’s called “natural disease conditions.” You introduce it to a large group of people who are likely already at the risk of infection by the target pathogen, and then wait and see if the vaccine reduces how many people get sick.

“After the vaccine passes satisfactorily all three trial phases and has been properly peer-reviewed, we will start building or extending the factories to manufacture them. Then, the newly produced vaccines get submitted to the WHO and various government agencies for approval.

And our scientists will rapidly develop further additives to improve immune response to the vaccines and their success.

This process worked well for most vaccines, but currently, we must shorten the normal development timeline and in the future as well: every day we can cut from this process will make a huge difference to the world in terms of saving lives, reducing suffering and reducing trillions of dollars in economic damage.”

One thing must be clearly understood: only by mandatory and global vaccination programs we can ensure we can stop and prevent new epidemics like COVID-19.Thus; every citizen should take his/her responsibility to have themselves and their beloved ones vaccinated

One thought on “Gates and Fauci Back Down on Vaccine Promises”