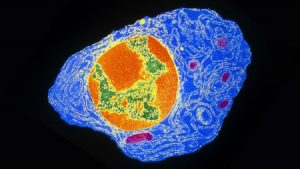 If flu vaccines made more bone marrow plasma cells (pictured here) that lived long lives, immunity would last longer: but so far, after decades of effort, these flu vaccines do not. (Gopal Murti/Science Source)

The annual influenza vaccine saves lives and spares many people from severe disease, which is why governments and employers promote and subsidize its use. But it’s hardly an ideal vaccine, offering so-so protection that wears off rapidly. A new, one-of-its-kind study, published today in Science, helps explain those shortcomings: A key cell type hidden in bone marrow that quickly kicks into activity after vaccination fades within a few months, researchers found. The discovery could lead to new strategies to increase the vaccine’s durability.

The best vaccines—such as the ones for measles, rubella, and diphtheria—provide almost 100% protection for life. Flu vaccines, however, often don’t exactly match the rapidly evolving and mutating influenza virus, so their effectiveness changes each year: In the United States between 2009 and 2019, it ranged from a low of 19% to a high of 60%. And protection wanes quickly: If you live in a temperate region of the world and receive the shot in the early fall, immunity can disappear before the end of that winter.

To better understand the durability problem, Rafi Ahmed, an immunologist at Emory University School of Medicine, homed in on a type of B cell that resides in the bone marrow and whose role Ahmed helped uncover in 1996. B cells make antibodies that can attach to and disable viruses. Ahmed focused on a type of B cell called bone marrow plasma cells (BMPCs), which continuously produce antibodies after an infection or vaccination. So-called memory B cells also produce antibodies and are created the same way, but in contrast to BMPCs, they do not steadily pump out the protective proteins. Instead, as their name implies, memory B cells that are trained to recognize a specific virus kick into gear only when they’re re-exposed to it. It takes them several days after an infection to produce high levels of antibodies—a disadvantage in influenza, which can cause disease rapidly.

To the surprise and disbelief of many, Ahmed’s group showed in 1996 that some BMPCs can live for many years, meaning they could, in theory, confer long-lasting immunity. Whether influenza vaccines trigger high levels of BMPCs and if so, whether the cells are the long-lived variety was a mystery, however.

Ahmed and colleagues repeatedly examined the bone marrow and blood of 53 volunteers aged between 20 and 45 years old in the weeks and months before and after they received influenza vaccines. (Some people participated over more than one flu season.) The study was no fun for the participants: Removing fluid from within a bone is a challenging and painful procedure that involves piercing the pelvic bone with a special needle. “The logistics … were very difficult, and I think nobody will ever try to do the same thing again,” Ahmed says.

Rino Rappuoli, chief scientist at GlaxoSmithKline Vaccines, says he knows of no other study that sampled bone marrow for vaccine research. “Rafi’s work is great and pioneering,” Rappuoli says.

The researchers found spikes of BMPCs specific for influenza 4 weeks after immunization. But after 1 year, the new cells were virtually gone. Rappuoli and others aren’t particularly surprised by this but welcome the evidence. “This finding tracks nicely with the observed rapidly waning (blood) antibody titers and decreasing protection in humans after getting the flu vaccine,” says Adam Wheatley, an immunologist at the University of Melbourne. “It’s a really nice piece of work.”

The study “helps define the landscape” of the flu vaccine’s poor durability, says Mark Slifka, an immunologist at Oregon National Primate Research Center who earned his Ph.D. with Ahmed more than 20 years ago but was not involved with this work. “They chipped away at the stone in terms of understanding why the immune response is short-lived,” Slifka says.

But Slifka thinks the BMPC population stimulated by vaccines likely has a small proportion of long-lived cells, undetected in this study that could offer more enduring protection. The way to boost their presence is to goose the system so that it makes more BMPCs overall, he says. One possible way to do this is with adjuvants, additives to vaccines that act as irritants, ramping up the immune response. It also may help to increase the amount of viral proteins in the vaccines, he says.

The first influenza vaccines, developed in the 1940s, used adjuvants. They contained killed flu viruses mixed it with a water-in-oil emulsion called “incomplete Freund’s.” But the adjuvant caused ulcers at the injection site, so it was dropped from later vaccines. To further reduce unwanted reactions, researchers also stopped injecting the entire killed virus, replacing it with only the surface proteins from the virus. The resultant vaccines had fewer viral proteins and no immune-boosting agents. These vaccines, used widely today, cause far fewer side effects—but they came at a steep cost, says Slifka, who last year published a review article that hammered in these points.

“We’ve damaged the immunogenicity and the durability of the response.”

But for the past 2 decades, improved adjuvants have found their way into licensed vaccines. A revamped influenza vaccine that has an oil-in-water adjuvant—the water shields the oil and makes it safer—has been used in Italy since 1997 and was approved by European and U.S. regulators in 2000 and 2015, respectively. But whether it’s able to trigger long-lasting BMPCs is unclear. No one in Ahmed’s study received this product—when the project began, it wasn’t even licensed in the United States—which is “a pity,” Rappuoli says.

“It’s totally crazy” that most commonly used influenza vaccines don’t include an adjuvant, Ahmed says. “I’m hoping that things will change in the influenza vaccine world, and 10 years from now, you will not be getting any non-adjuvanted vaccines. This has been going on for years. It’s hard to change the industry.”

“Currently, there are used approx. 28 adjuvants / additives in vaccines routinely used for establishing a better immune response. Especially since 1975, a variety of additives & adjuvants have been developed and applied but also these additives have major risks and side effects; including life-long damage and illness (various neurologic and auto-immune diseases).”

Robert Gorter: “what is the bottom line?