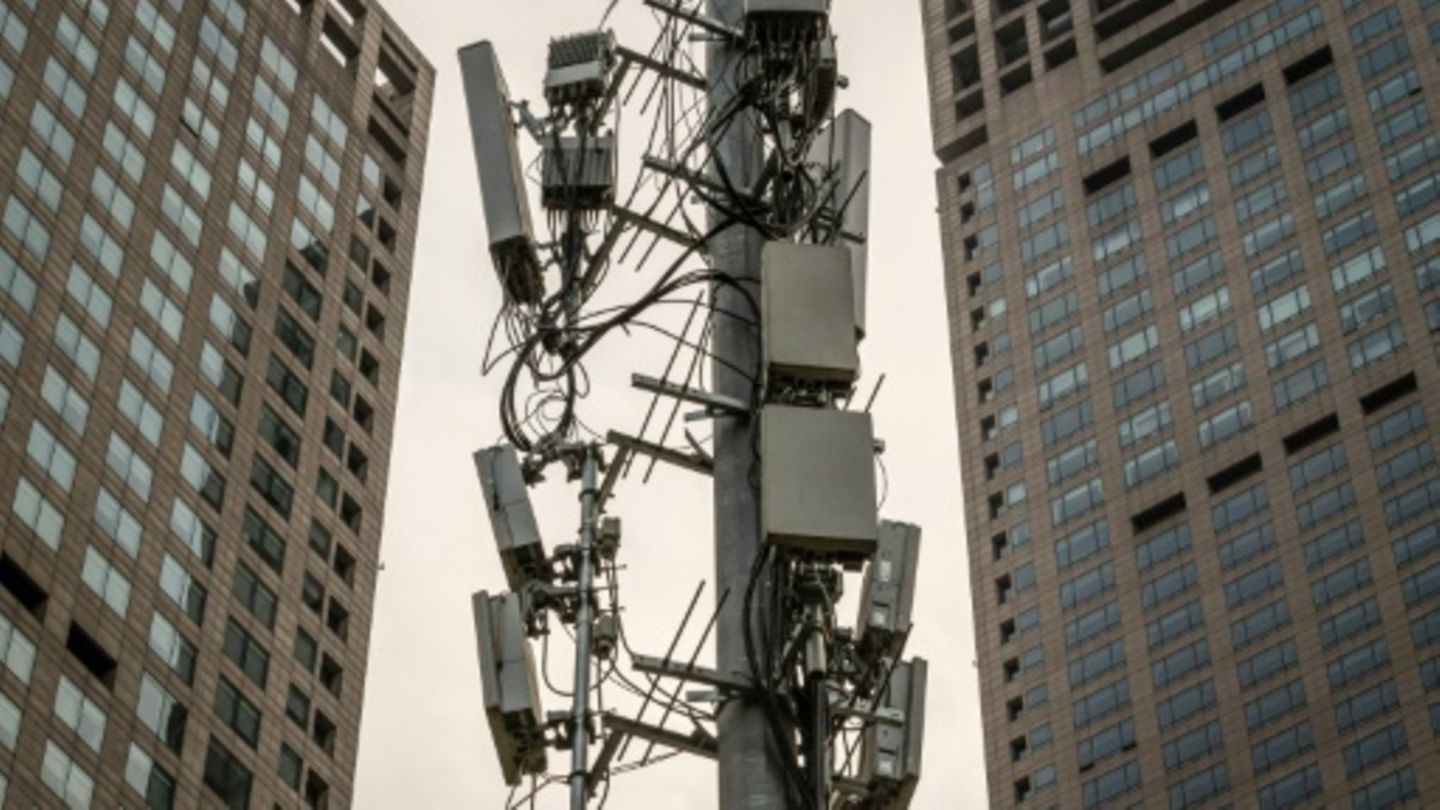 Multiple studies have shown the association between the use of mobile phones and other devices, like laptops, and various forms of cancer. This synopsis is meant to pay attention to the correlation and that the average person (patient) gets informed.

The medical literature shows two reasons for the increased risks of electromagnetic apparatus:

The following articles have just been chosen to give an impression where science stands today. Electromagnetic radiation (including 4G and 5G) have a disruptive effect on many cell functions, causing abnormal metabolic processes and gene alterations (mutations).

The blue light disrupts the functioning of the pineal gland. The pineal gland is a small endocrine gland in the brain of most vertebrates. The pineal gland produces melatonin, a serotonin-derived hormone which modulates sleep patterns in both circadian and seasonal cycles. The shape of the gland resembles a pine cone from which it derived its name. The pineal gland is located in the epithalamus, near the center of the brain, between the two hemispheres, tucked in a groove where the two halves of the thalamus join. The pineal gland is one of the neuroendocrine secretory circumventricular organs in which capillaries are mostly permeable to solutes in the blood.

From the point of view of biological evolution, the pineal gland represents a kind of atrophied photoreceptor. In the epithalamus of some species of amphibians and reptiles, it is linked to a light-sensing organ, known as the parietal eye, which is also called the pineal eye or third eye.

Breast cancer occurring in women under the age of 40 is uncommon in the absence of family history or genetic predisposition, and prompts the exploration of other possible exposures or environmental risks. We report a case series of four young women—ages from 21 to 39—with multifocal invasive breast cancer that raises the concern of a possible association with nonionizing radiation of electromagnetic field exposures from cellular phones. All patients regularly carried their smartphones directly against their breasts in their brassieres for up to 10 hours a day, for several years, and developed tumors in areas of their breasts immediately underlying the phones. All patients had no family history of breast cancer, tested negative for BRCA1 and BRCA2, and had no other known breast cancer risks. Their breast imaging is reviewed, showing clustering of multiple tumor foci in the breast directly under the area of phone contact. Pathology of all four cases shows striking similarity; all tumors are hormone-positive, low-intermediate grade, having an extensive intraductal component, and all tumors have near identical morphology. These cases raise awareness to the lack of safety data of prolonged direct contact with cellular phones.

Exposure to radiofrequency radiation increases the risk of breast cancer: A systematic review and meta-analysis 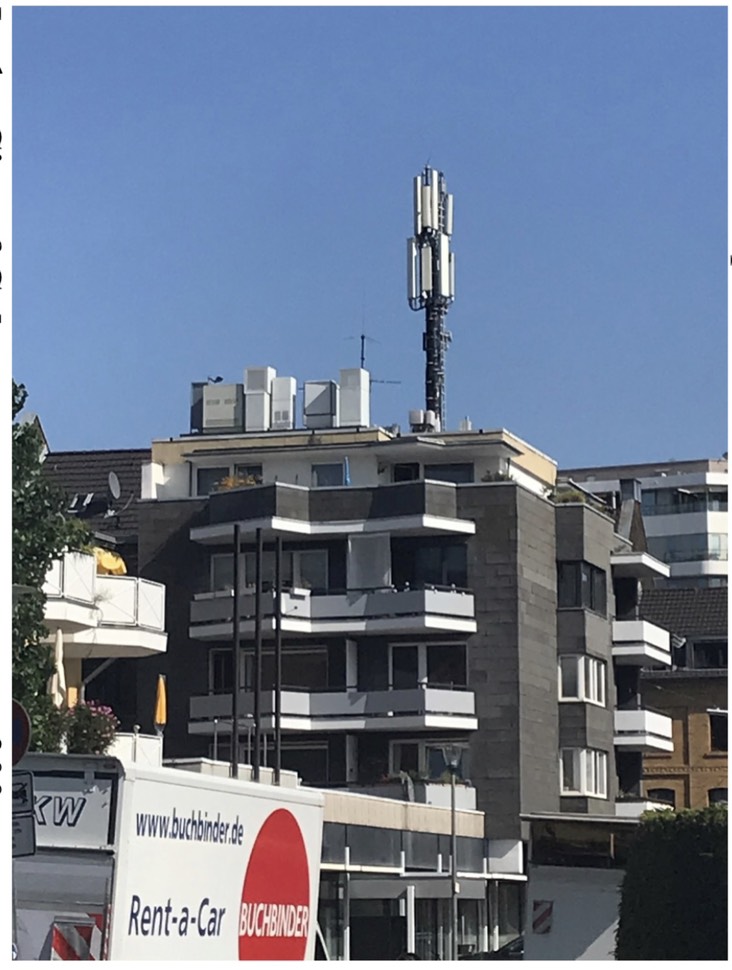 In the City of Cologne, at every approx. 300 meters a 5G tower on top of apartment buildings

Association between mobile phone use and semen quality: a systemic review and meta-analysis

Possible hazardous health effects of radiofrequency electromagnetic radiations emitted from mobile phone on the reproductive system have raised public concern in recent years. This systemic review and meta-analysis was prepared following standard procedures of the Cochrane Collaboration and the Preferred Reporting Items for Systematic Reviews and Meta-Analyses statement and checklist. Relevant studies published up to May 2013 were identified from five major international and Chinese literature databases: Medline/PubMed, EMBASE, CNKI, the VIP database and the Cochrane Central Register of Controlled Trials in the Cochrane Library. Eighteen studies with 3947 men and 186 rats were included in the systemic review, of which 12 studies (four human studies, four in vitro studies and four animal studies) with 1533 men and 97 rats were used in the meta-analyses. Systemic review showed that results of most of the human studies and in vitro laboratory studies indicated mobile phone use or radiofrequency exposure had negative effects on the various semen parameters studied. However, meta-analysis indicated that mobile phone use had no adverse effects on semen parameters in human studies. In the in vitro studies, meta-analysis indicated that radiofrequency radiation had detrimental effect on sperm motility and viability in vitro [pooled mean difference (MDs) (95% CI): -4.11 (-8.08, -0.13), -3.82 (-7.00, -0.65) for sperm motility and viability respectively]. As for animal studies, radiofrequency exposure had harmful effects on sperm concentration and motility [pooled MDs (95% CI): -8.75 (-17.37, -0.12), -17.72 (-32.79, -2.65) for sperm concentration and motility respectively].

Taken together, the findings “confirm that RF radiation exposure has biological effects,” many of them “relevant to carcinogenesis,” says Jon Samet, a professor of preventive medicine and dean of the Colorado School of Public Health, who did not participate in either study. Samet. Indeed, heart schwannomas have been reported in an alarming rate but generally are exceedingly rare in humans; only a handful of cases have ever been documented in the medical literature. Under exposure of carrying mobile phones at chest level, an increase of heart schwannomas have been documented.

When turned on, cell phones and other wireless devices emit RF radiation continually, even if they are not being actively used, because they are always communicating with cell towers. The dose intensity tails off with increasing distance from the body, and reaches a maximum when the devices are used next to the head during phone calls or in front of the body during texting or tweeting.

There is a catch, though: the Internet of Things will require augmenting today’s 4G technology with 5G technology, thus “massively increasing” the general population’s exposure to radiation, according to a petition signed by 236 scientists worldwide who have published more than 2,000 peer-reviewed studies and represent “a significant portion of the credentialed scientists in the radiation research field”, according to Joel Moskowitz, the director of the Center for Family and Community Health at the University of California, Berkeley, who helped circulate the petition. Nevertheless, like mobiles, 5G technology is now being introduced without pre-market safety testing.

Lack of definitive proof that a technology is harmful does not mean the technology is safe, yet the wireless industry has succeeded in selling this logical fallacy to the world. The upshot is that, over the past 30 years, billions of people around the world have been subjected to a public-health experiment: use a mobile phone today; find out later if it causes genetic damage or cancer. Meanwhile, the industry has obstructed a full understanding of the science and news organizations have failed to inform the public about what scientists really think. In other words, this public health experiment has been conducted without the informed consent of its subjects, even as the industry keeps its thumb on the scale.

In 28 March 2018, the scientific peer review of a landmark United States government study concluded that there is “clear evidence” that radiation from mobile phones causes cancer, specifically, a heart tissue cancer (Schwannoma) in rats that is too rare to be explained as random occurrence.

Eleven independent scientists spent three days at Research Triangle Park, North Carolina, discussing the study, which was done by the National Toxicology Program of the US Department of Health and Human Services and ranks among the largest conducted of the health effects of mobile phone radiation. NTP scientists had exposed thousands of rats and mice (whose biological similarities to humans make them useful indicators of human health risks) to doses of radiation equivalent to an average mobile user’s lifetime exposure

The peer review scientists repeatedly upgraded the confidence levels the NTP’s scientists and staff had attached to the study, fueling critics’ suspicions that the NTP’s leadership had tried to downplay the findings. Thus the peer review also found “some evidence” – one step below “clear evidence” – of cancer in the brain and adrenal glands.

Not one major news organization in the US or Europe reported this scientific news. But then, news coverage of mobile phone safety has long reflected the outlook of the wireless industry. For a quarter of a century now, the industry has been orchestrating a global PR campaign aimed at misleading not only journalists, but also consumers and policymakers about the actual science concerning mobile phone radiation. Indeed, big wireless has borrowed the very same strategy and tactics big tobacco and big oil pioneered to deceive the public about the risks of smoking and climate change, respectively. And like their tobacco and oil counterparts, wireless industry CEOs lied to the public even after their own scientists privately warned that their products could be dangerous, especially to children.

Research has shown that blue light from cell phones and laptops disrupt one’s circadian rhythms and make it hard to sleep.

A new study documents that blue light from street lamps and home devices may increase risk of prostate cancer. 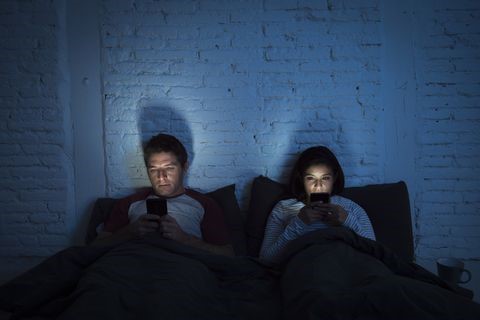 Health professionals often warn that late night cell phone usage can keep you awake, but a new study found a more alarming reason to give up browsing the internet in bed: prostate cancer.

Everyday devices like cell phones, computer screens, and even street lamps emit blue light, which research shows disrupts our circadian rhythms and confuses the body about when it’s time for sleep. There’s been emerging evidence that this could increase people’s cancer risk — and now, a study published in the journal Environmental Health Perspectives reveals that blue light exposure more than doubles a man’s risk of prostate cancer or increase a woman’s chances of developing breast cancer by at least 1.5 times.