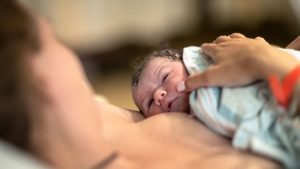 The bacteria that live in our bodies, particularly our guts, play key roles in immunity and development. But babies born by cesarean section don’t get the rich blend of microbes that come from a vaginal birth—microbes that may help prevent disorders such as asthma and allergies. Now, a study suggests feeding these infants a small amount of their mothers’ feces could “normalize” their gut microbiome—the ecosystem of bacteria, viruses, and fungi in the digestive system—and possibly give their immune systems a healthier start.

Newborns’ guts are blank slates: Babies born vaginally get microbes from their mother’s perineum (the area around the vulva and anus), and those born by C-section get them from mom’s skin. Within just a few hours, the differences are stark. For example, Bacteroides and Bifidobacteria bacteria are abundant in the guts of babies born vaginally, but “almost absent in C-section babies,” says Willem de Vos, a microbiome scientist at the University of Helsinki. Because babies born by C-section have higher rates of immune-related disorders later in life, researchers think this early-life bacteria could “prime” the immune system during a critical development period.

To lessen the damage, previous studies have “seeded” C-section babies with their mothers’ vaginal microbiota. But when those efforts didn’t seem to do the trick, de Vos and colleagues theorized that vaginally born babies might get their microbes from accidentally ingesting a smidgen of their mother’s stool during the birthing process. So they recruited 17 mothers preparing to give birth via C-section. Three weeks before the women were to give birth, their fecal samples were scanned for pathogens including group B Streptococcus and herpesvirus.

Seven women had pathogen-free samples. After they gave birth, the researchers mixed 3.5 or 7 milligrams of their diluted fecal matter into 5 milliliters of breast milk—donated from a breast milk bank and pumped from the mothers themselves—and then fed it to their babies.

Next, the scientists analyzed the babies’ gut microbiomes by sequencing genetic material in their feces. They started with the very first bowel movement, known as the meconium, and continued sampling at regular intervals over 12 weeks. When they compared the microbiomes with those of 29 babies born vaginally and 18 born by C-section without fecal transplants, they found the treated babies’ microbiota evolved to resemble those of vaginally born babies within 3 weeks, they report today in Cell. Typically, it takes a full year for this transition to happen.

Like babies born vaginally, treated infants had abundant colonies of Bacteroidales within days. And compared with untreated C-section babies, the treated infants had significantly fewer pathogenic bacteria, such as Enterococcus faecium and Salmonella enterica. The infants didn’t experience any adverse effects during the study period, de Vos says.

Knowing how much feces to expose them to is critical, however, adds John Penders, a medical microbiologist at Maastricht University. “We don’t know how much babies ingest naturally, so getting the right dose requires careful testing.” Longer studies with more infants should ensure the dose is safe, he says.

De Vos and his colleagues have already started such a study: a randomized, controlled trial in which dozens of C-section babies receive either feces from their mothers or a placebo. The researchers plan to monitor the babies’ health over several years, he says. In the meantime, de Vos cautions that fecal transplants require careful medical management. “This is not something parents should be doing at home.”

Dr. Gorter: Still as a family practitioner in Amsterdam in the 1970’s, I would do all home deliveries and often deliveries for my colleagues as I like to accompany the process of birth: and feel between my hands how the soul takes hold of the newborn’s body during those few seconds right after birth when the baby starts breathing and crying.

Of course, I worked under standard sterile conditions but also knew that the bacteria’s of the mother and of the household in general would quickly colonize the gut and the skin of the newborn and become part of a well-functioning immune eco-system.

And now important breastfeeding was; for multiple reasons but for sure also to help jumpstarting immune function of the newborn properly.

A bit later in life, man carries with him and in him 10 times more bacteria’s than the total number of the cells of his body.