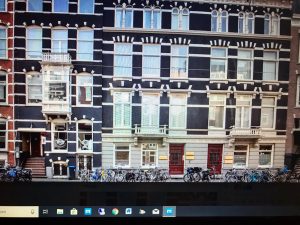 Dr. Gorter had always been interested in how nutrition (but also pesticides and artificial fertilizers) would influence health and disease. But at the university, it was a non-issue and not taught in any way.  For ethical reasons, since age four, Dr. Gorter decided to continue to live as a strict ovo-Lacto vegetarian by own will and also never drank any alcohol. Almost since the day Dr. Gorter started his Day Care Health Center, he was consulted by many cancer patients; also from far away and from other countries cancer patients came. Dr. Gorter would almost always discuss with patients lifestyles and nutrition. Then often the same issues came up:

Thus; the idea with Dr. Gorter came to set up next door a health food restaurant where

Thus, a restaurant was established. Dr. Gorter choose the name Baldur as in Germanic Mythology, this God stands for Renaissance; Enlightenment, Resurrection in a certain sense. Baldur’s team cultivated its herbs like Rosemary, Sage, Lavender, Thymian, Garlic, etc. for the kitchen according to the bio-dynamic principles. Eighteen people worked full time at Baldur and all according to the principles of the three-Fold Social Order, where, for instance, income was only determined by the needs of each coworker. 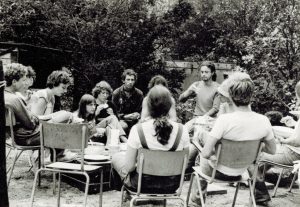 In the picture above one can spot Robert Gorter chairing a meeting with most of the BALDUR team members on a sunny early spring day in the back yard of BALDUR and the Ita Wegman Huis (daycare health center). Robert Gorter is seen from his back completely to the right in the picture. 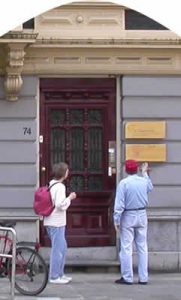 The front door of the Ita Wegman Huis in Amsterdam

In the social ferment of postwar Europe in 1919, Rudolf Steiner, Ph.D. (1861 – 1925) presented his ideas about reforming the basis of society in three fundamental, autonomous spheres: economic, political/rights, and cultural. For a short time, he worked to bring his ideas into the practical application but it soon became impossible to bring about a “threefold social order” and he withdrew from the outer work in this area. His ideas have been worked with over the decades since that time and have proved to be just as valid today as they were then.

These concepts have their roots in the ideals of the French Revolution.

Since the French Revolution, these three principles have stand model for the Founding Fathers who wrote the American Constitution. Even the text of the Bill of Human Rights shows clearly these three principles (the basis for the United Nations which were founded in San Francisco, California in 1949, and not in New York City where the headquarters presently are).

Brotherhood is the area where production and sharing of goods take place. One’s labor is considered a gift to all and thus, one cannot be paid per hour but each one’s economic needs should be met by all coworkers together. 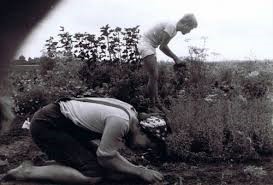 According to all principles of Bio-Dynamic Agriculture, BALDUR coworkers grew all herbs on own organic farm. Baldur’s team cultivated its herbs like Rosemary, Sage, Lavender or Garlic, for the kitchen according to the bio-dynamic principles and here, with Tineke van Oranje (she was also Robert Gorter‘s secretary at the Jellinek Kliniek, a state clinic for heroin addicts and alcoholics) and Annet Stomph on their knees, carefully selecting the herbs for that night dinner (approximately 1978).

It was the sincere wish of Robert Gorter, MD, Ph.D., to implement these principles of Three Fold Social Order in the way the restaurant Baldur in Amsterdam would function. One of the consequences was that everybody who worked in the restaurant would not be paid per hour and educational background but according to the needs of each. Thus, twice or thrice year, the team would come together and determine how the money that came in was fairly distributed among the team members according to their economic (financial) needs.

Each team member would get a mandate for a certain period to carry a certain responsibility, like bookkeeping or buying the bio-dynamic (organic) produce and plan the menu for the week-to-come. 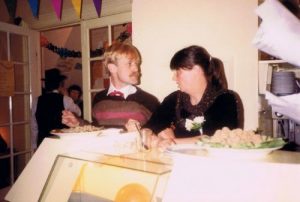 Often and after his clinic ended, Robert Gorter would help out being a waiter or do the dishes or mop the floors and clean the hallways and restrooms after 11.00 PM (23.00). Here Dr. Gorter (l) with Ilse Bartels taking orders just before a live coffee concert would start (ca. 1980)

It must be said here that for quite a few years it worked very well. When Robert Gorter immigrated to the USA, he put all properties and endeavors in the “Odin Foundation” (NL: Stichting Odin).  He left the management and decisions-making to all who had been their work for at least three years. To share income according to the needs of your peers is more difficult than one would think. Unfortunately, a few years after, the departure of Robert Gorter from Amsterdam to San Francisco, California, to start an academic career, the principles of Three Fold Social Order were dropped. 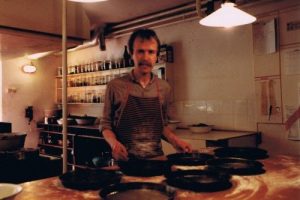 Another coworker who was mostly working as one of the cooks.  Here, he is busy baking pies and cookies in the kitsch which was so large that it covered the complete restaurant as a “sous-terrain” with access to the garden (ca. 1978) 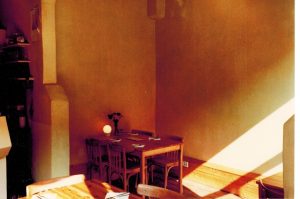 Although there was a no formal uniform for the coworkers, we agreed to wear as much as possible a white T-shirt with the Baldur Logo 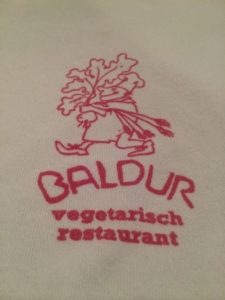 Each co-worker of the (Bio-Dynamic) vegetarian restaurant Baldur at the Weteringschans 76 in 1017 XR Amsterdam (next to the Ita Wegman Huis) would wear a white T-shirt with this logo. For a while, these T-shirts were very popular and were acquired daily by customers with a “happy Tommy.”

The Logo shows a gnome who is collecting in the garden all ingredients to cook vegetarian. 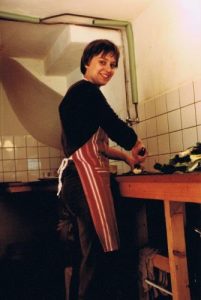 Still another coworker but she was somewhat “petite” and therefore, she needed to stand on a crate to reach comfortably the counter-top for her chopping, cutting and rasping…

The three monumental buildings at Weteringschans 72-76 which Dr. Gorter could obtain my huge mortgages were adjacent to each other and the gardens were united by Dr. Gorter so that there was a little park and he even had chicken there which would often sleep in the trees at night…. 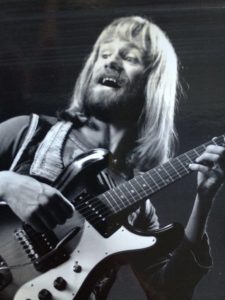 Robert Gorter (ca. 1970) as a mini popstar and a B movie star (for gangster movies when Bonnie and Clyde were popular) but he could not leave behind classical music. And, of course, he was determined to become a medical doctor. He played at fundraisers like at the summer rock concerts in the Amsterdam Vondelpark, Amsterdamse Bos and Kralingen (?) in Rotterdam

Another activity by Dr. Gorter was to organize live classical Coffee Concerts on Sunday mornings at Baldur. Usually, students from the Conservatory were invited to play classical chamber music. Once, Nelly van der Spek, a world-renowned soprano who was often in New York and Milan in oratories (“bel canto”) and operas (Puccini and Mozart). Nelly van der Spek became a patient of Dr. Gorter and his team and he was able to restore her voice she had lost for years. She was, of course, extremely grateful and as a “thank you” she offered to sing in Baldur a few times. 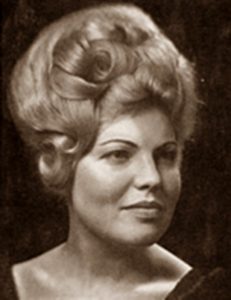 These coffee concerts became so popular that often an hour before the restaurant would open and two hours before the concert would start, people already lined up at the sidewalk.

The coffee concerts were “free of entry” and for free, coffee was served together with Baldur’s most popular dessert: the “Banana Dream Pie.”

To offer free concerts and expositions is also part of the principles of the Three-Fold Social Order. From the realm of economics, culture and education are supported. These free concerts with Banana Dream Pie” (in Dutch “bananendroomtaart”) were also very good advertisement and people came for lunch or dinner after a coffee concert…..

A few weeks before opening Baldur, secretively in the middle of the night, Robert Gorter and a friend posted many posters in the center city of Amsterdam with the text: “in three weeks it will happen!” and then a week later “in two weeks it will happen” and then “next week it will happen!.” Many people started to wonder what that could be….? Even a local newspaper paid attention to these mysterious messages till posters appeared everywhere that it had happened: Baldur had opened…. It was a very effective form of marketing and advertising. 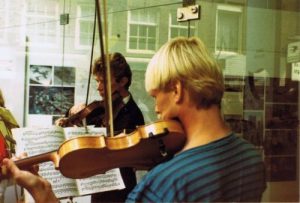 Robert Gorter plays the violin and the viola on special instruments built on indications by Rudolf Steiner (1861-1925). At times, he would play classical music only as a street musician with (to be noticed in the back) Dr. Arie Bos, to whom Dr. Gorter donated his practice

At number, 72 Dr. Gorter had established his clinical practice since 1973 and lived on the top floors. At number 74, he established the Day Care Health Center for anthroposophic therapies (The Ita Wegman Huis), like physiotherapy (with wooden bathtubs to offer hot baths to cancer patients to increase core body temperature); curative eurhythmy, art therapies, music therapy, biographic work, etc. At number 76, Baldur was located. 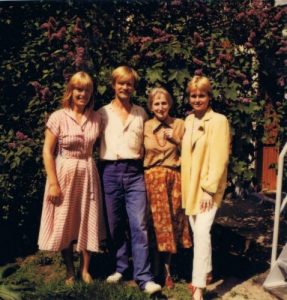 From left to right: Ria Bos, Robert Gorter, Herma, and Elly Bos (Ria and Elly are sisters) as the team at the reception of his own practice seven days a week.

Since Dr. Gorter had to acquire three large mortgages to finance the purchase of the buildings AND all the renovations he did, he worked nine years very hard and also on most weekends. Nobody can remember he ever took a holiday. Some do remember he went twice a few days on a mission for Amnesty International (AI) to Greece after the military junta fell and to Argentina for similar reasons. 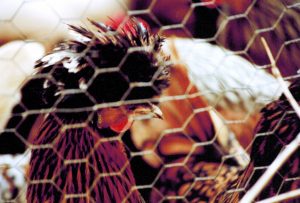 In the backyards of the buildings 72-76, Robert Gorter set up a henhouse with about 25-30 chicken that laid all year round organic eggs for BALDUR (and a few for own use). Since the chicken had no clipped wings, usually they slept high up in the surrounding trees at night. 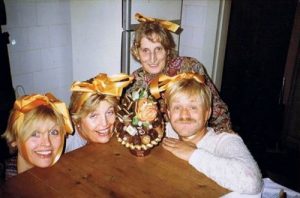 Robert Gorter and three of his receptionists and doctors’ assistances (Ria Bos and her sister Elly van de Noort, and Herma, the elderly lady standing) at that time, at the house of Rob, the best bakery of Amsterdam in the Kalverstraat next to the 15th-century Orphanage (which is now a museum). It was obviously just before Eastern (1981) and the team acted like Eastern Eggs and tried to blend in with a true Eastern Egg which was like a “Thank You” donated by Rob the baker, for the team of Robert Gorter had done for his wife who died pretty suddenly from an aneurysm in the brain. 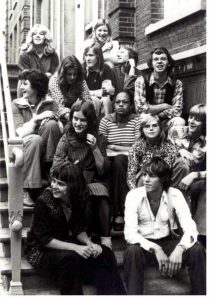 Robert Gorter and the Baldur team members. This picture was taken on the staircase leading to the entrance of Baldur one morning (in 1975?). One can see part of the team of 18 members in total that runs Baldur at that time.