Biden Family’s Corruption Is Nothing New and Largely Legal 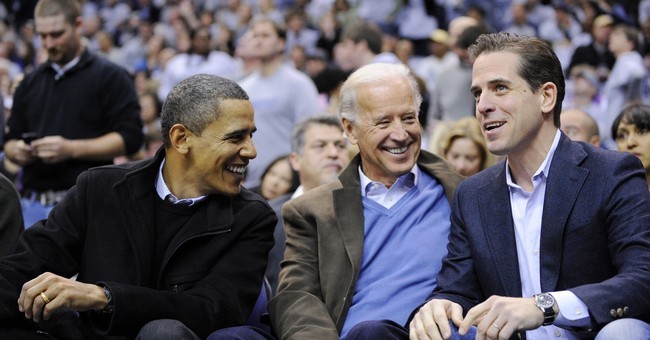 When Corruption is Common Place

When you get to make the rules, they always favor you. Parents can do things they forbid their kids from doing, bosses can take long lunches while insisting you not return late, and politicians can take pay-offs while…actually, there isn’t much of a private sector equivalent for that one.

The word “bribe” has an obvious, legal meaning that, through a few tricks built into the system by the politicians who wrote the laws, helps them avoid breaking them while taking what amounts to bribes.

Merriam-Webster Dictionary defines a bribe as

1: money or favor given or promised in order to influence the judgement or conduct of a person in a position of trust;

2: something that serves to induce or influence.

That’s the short version of what Ukrainian oil and gas company *Burisma did with Hunter Biden. The firing of the prosecutor pursuing a corruption investigation of the company’s business practices and owner at the insistence of Hunter’s dad, the then vice president, is the unambiguous second part of that hypothetical transaction.

But it’s not a bribe, not legally. Not even a pay-off. It’s a perfectly legal coincidence.

Hunter was making a fortune with no skills, knowledge, or abilities, but it was a drop in the bucket compared to the net worth of the company. From their perspective, it was a smart and cheap investment.

It was also legal. As was all the other sweetheart deals Hunter got out of Russia, China, and who knows where else.

How? Because, unless there is a paper trail of Joe Biden saying he’d do something in exchange for cash, any favorable treatment Hunter’s sugar daddies got can be chalked up to coincidence.

Any illegal activity on behalf of Joe would come from him getting a piece of the action and hiding the money. While there are strong indications and insinuations that Joe was wetting his beak, he knows the law and it would be unlikely to be found out. This is compounded by the fact that no one is looking. Journalists aren’t interested, neither, it seems, is the FBI. If he wins next week, the story will disappear faster than Tara Reade’s name from newspapers.

What the Bidens appear to have done is not new. Direct payments of bribes are a thing of the past. Today’s politicians now engage in corruption by proxy and by “Foundations” and “Charitie” they own.

Pioneers in this new bribery were none other than the Clintons. Bill and Hillary raked in a fortune through their “charities,” and lived quite well off that money.

*Burisma Holdings Limited (Ukrainian: Бурісма Холдингс) is a holding company for a group of energy exploration and production companies. It is based in Kyiv, Ukraine, but registered in Limassol, Cyprus (the usual trick to avoid paying corporate taxes). Burisma Holdings has operated in the Ukrainian natural gas market since 2002. It is one of the largest private natural gas producers in Ukraine.[4][5] It is owned by Ukrainian oligarch Mykola Zlochevsky through his company Brociti Investments Limited (Ukrainian: Бросіті Інвестментс Лімітед).

Aleksander Kwaśniewski, former President of the Republic of Poland, was appointed to the board in January 2014.[34][35]

Taras Burdeinyi is the chief executive officer of Burisma Holdings,[1][11] and Alan Apter is chairman of the board of directors.[2][3] As of 14 October 2019, the members of the board of directors, in order of seniority, are Alan Apter, Aleksander Kwaśniewski, Joseph Cofer Black, Karina Zlochevska, Christina Sofocleous, Riginos Charalampous, and Marina Pericleous.[2][3] Aleksander Kwaśniewski, former president of Poland, joined the board in January 2014.[34][35] In 2017, Joseph Cofer Black, former director of the Counterterrorism Center of the Central Intelligence Agency (1999–2002) in the George W. Bush administration and former Ambassador-at-Large for counter-terrorism (2002–2004), was appointed to the board.[36] Karina Zlochevska, daughter of Mykola Zlochevskiy, was also appointed in February 2016.[2][3]

In April 2014, Devon Archer, a former senior adviser to the John Kerry 2004 presidential campaign, and Hunter Biden, an attorney and the son of then-US vice president Joe Biden, joined the board.[34][37] Archer left the company in 2018[38] and Hunter Biden left in April 2019, when his term as a director expired.[9]

Burisma Holdings does not disclose its financial results.[9][17] It has been calculated, based on a minimal natural gas price, that the company’s revenue in 2018 must have totaled at least US$450 million.[9]

In April 2014, the Serious Fraud Office of the United Kingdom launched a money laundering investigation against Zlochevsky and accounts of Burisma Holdings and its parent Brociti Investments at the London branch of BNP Paribas containing US$23 million were frozen. That money was transferred as a result of complex transactions by a company controlled by a Ukrainian businessman Serhiy Kurchenko, a subject of the European Union restrictive measures.[39] When the Ukrainian prosecutor general’s office failed to provide documents needed for the investigation, a British court in January 2015 dropped the case and ordered to unfreeze the assets.[40] In September 2015, then-U.S. Ambassador to Ukraine Geoffrey Pyatt gave a speech in which he called out Ukrainian prosecutors for failing to cooperate with the investigation.[40]

Office of the Prosecutor General of Ukraine and National Anti-Corruption Bureau of Ukraine (NABU) have conducted in total 15 investigations on Burisma’s owner Zlochevsky.[41] In 2016, former Prosecutor General Yuriy Lutsenko accused Burisma subsidiaries of conspiracy and tax evasion of about one billion hryvnias (US$70 million) in 2014–2015, but later during investigation subsidiaries of Burisma were not mentioned.[42] Tax audit of Esko-Pivnich by the State Fiscal Service found some violations in 2016. As a result, 50 million hryvnias (US$1.9 million) of additional taxes was paid to eliminate criminal charges.[42] In total, Burisma paid additional 180 million hryvnias (US$7.44 million) of taxes to avoid further criminal proceedings.[9][25] A criminal investigation was conducted if natural resources extraction licenses were issued to Burisma subsidiaries legally during the period Zlochevsky held government office. Although violations of the procedure were established by NABU, the Specialized Anti-Corruption Prosecutor’s Office missed procedural deadlines for a lawsuit and the case for nullifying licenses was dismissed by the court.[42] In October 2019, Prosecutor General Ruslan Riaboshapka announced that all 15 investigation cases will be reviewed.[41]

A few out of 100 million examples:

When you think of bribes you think of very specific asks – do this and I’ll give you that. In international politics, bribes are ways to curry favor to get better treatment in the future. Saudi Arabia didn’t give $20 million to the Clintons’ charities because they wanted to provide mosquito nets to Africa. To do that, Saudi Arabia could have simply purchased $20 million worth of mosquito nets and sent them there directly. They wanted to be in the good graces of who they, and the world, thought would be the next president of the United States. The same is true for most of Hunter’s business deals.

The only difference between the shady dealings of the Clintons and the Bidens is that the Clintons had the good sense to give it the cover of charity. The Bidens, just as corrupt as Bill and Hillary but not nearly as sophisticated, went right for the profit; for cash payments.

Proving a bribe when filtered through others is nearly impossible; someone would have to roll. People in power know the rules, they wrote them. The public would be shocked if they knew exactly what is legal.

A member of Congress facing virtually no challenge in a safe district can’t take campaign cash and put it in their pockets because that would be illegal. They can, however, hire their spouse and pay them almost $3 million for “consulting,” or 70 percent of their campaign spending, and it’s perfectly legal. Ilhan Omar did just that. She couldn’t take the money herself, but she could pay her husband’s consulting firm $2.7 million and he could put his chunk of that money in their joint bank account and *poof* it’s legal. (sic). And consistent rumors (Proof?) that she married her own brother to provide him a Green Card (resident status).

There likely isn’t a cashed check or findable bank account with Joe Biden’s name on it. Even Joe is too smart to have signed anything. But Switzerland and many Caribbean countries don’t have strict banking laws and pride themselves on secrecy.

Joe has made millions since leaving office in 2017, so it’s not like he needs the money, especially at his age. Still, you make hay while the sun is shining. He likely wants to take care of his family after he’s gone. The motive is clear, the details are foggy, and the truth is most of what we’re likely to ever learn about it is quite possibly “legal.”

Derek Hunter is the host of a free daily podcast (subscribe!), host of a daily radio show on WCBM in Maryland, and author of the book, Outrage, INC., which exposes how liberals use fear and hatred to manipulate the masses. Follow him on Twitter at @DerekAHunter.

What To Know About The Ukrainian Company At The Heart Of Trump’s Biden Allegations. NPR. Retrieved 6 October 2019.

Сын вице-президента США вошел в совет директоров частного газодобытчика в Украине [The son of the vice president of the United States joined the board of directors of a private gas producer in Ukraine]. CFTS (in Russian). 12 May 2014. Retrieved 6 October 2019.