As of 2017, even after the Nobel Prize was Awarded to this Therapy, why are Dendritic Cells as an Effective Cancer Therapy still Ignored or even Ridiculed by some “Scientists”?

Dendritic Cells (DC) can be compared to policemen of the immune system. DC migrate throughout all inner organs of the body, looking for abnormal (bad) cells. These are usually cancer cells.
Each human being makes at least 100.000 cancer cells per day which are recognized by DC and if all functions well, all cancer cells have been killed within about 24 to 30hours after the DC recognized the cancer cell and initiated an immune response to kill this specific cell.
As long as this part of the immune system is functioning adequately, nobody can get clinically cancer. But each human being (and animal for that matter) has a little bit of cancer.
Many things can go wrong in one’s life and when one becomes too much immunocompromised, the policemen can see less well (as if they need reading glasses) and cancer cells get a chance.

Dr. Gorter reports:
“Globally, the business with chemotherapy and radiation is a hundreds-of-billions of Euros (Dollars) industry and a lot of money has been invested and, in return, ten to 25 times more is being earnt. Secondly, pharmaceutical companies, hospitals and doctors alike are making (huge) profits of people who are ill. Hospitals and modern medicine wants you to get or be ill as there would be hardly any health industry left. Therefore, in modern medicine, there is very little money and attention for prevention of illness or non-toxic treatment modalities. Ninety-nine percent of what medical students learn is about disease and standards protocols how to treat with patented medications. Less than 1% of the curriculum is spent on prevention of disease.” 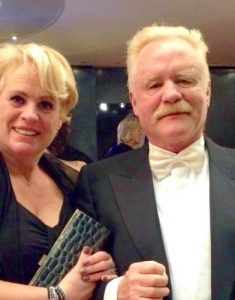 Paulien de Graaf-Cobelens and Dr. Robert Gorter at the opera in Amsterdam

Paulien de Graaf-Cobelens and Dr. Robert Gorter at the opera in Amsterdam on November 10th, 2014, to celebrate life after being 6 years completely free of end-stage breast cancer by attending the opera Lohengrin by Richard Wagner. In 2017, 9 years later, after her treatment according to the Gorter Model, Paulien de Graaf is still kicking, living a full life and is completely free of cancer. Paulien is one of hundreds of dying cancer patients who recovered completely and added another 10 to 15 years of their lives in excellent health and spirits.