WEF advisor Yuval Harari: ‘We don’t need most of the population!!!’ 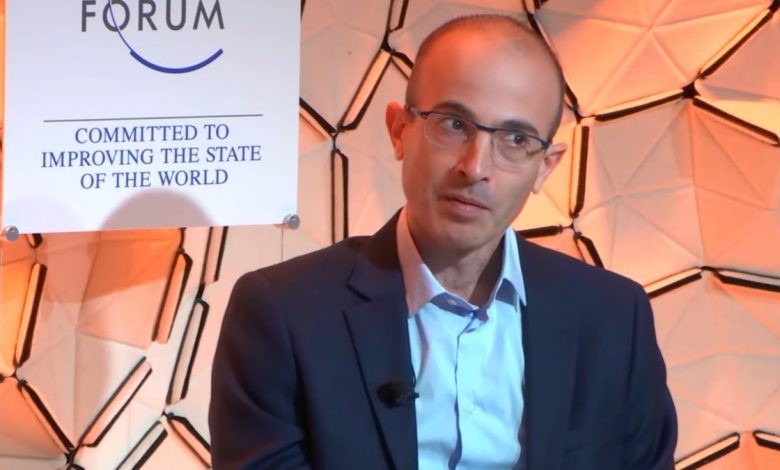 „We are heading for a world where people are ‘no longer part of the story of the future, thanks to artificial intelligence and other technologies.“ That’s what Yuval Noah Harari, a senior adviser to the World Economic Forum and close friend of Klaus Schwab, said in a conversation with Chris Anderson, the director of TED Talks.

There are all kinds of smart people in California, New York, and in Beijing who are planning an impressive future with artificial intelligence, bioengineering, global connectivity, and things like that. As a result, people feel like they aren’t needed, says Harari.

They might get some crumbs if they behave well, like a basic income, but it’s much worse psychologically to feel useless than to feel exploited, he continued. 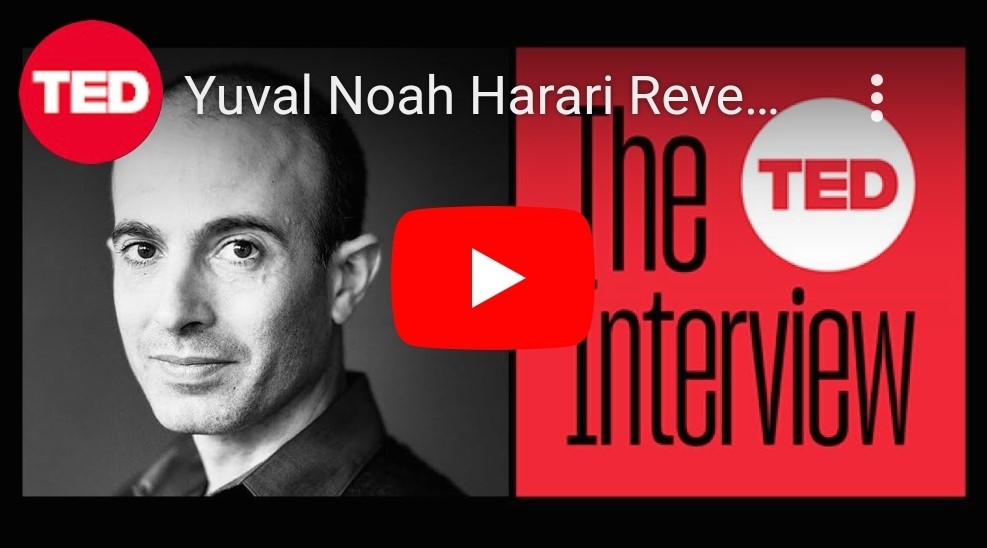 “We simply don’t need most of the population because the future is about developing more and more sophisticated technology, like artificial intelligence and bioengineering. Most people don’t contribute anything except maybe their data,” Harari said, adding that these technologies are increasingly making people redundant.

„If most tasks are performed by robots and artificial intelligence, people can start focusing on things they find interesting?“ Anderson said.

Harari agreed with him that many new jobs will be created, but noted that most people will not be suitable for them and will be left behind.

Race to be the First

Anderson asked whether there are also conceivable scenarios in which humans are part of the story. Harari dodged the question, warning that “there is now a race to hack humanity and you in particular.”

„One has to stay ahead of his competitors of the big corporations, namely the governments that try to hack you. So; you need to get to know yourself better because there are now forces active trying to hack you,“ Hariri said.

Rudolf Steiner explicitly warned about what we are experiencing today.

Please, take notice of this report to inform yourself what Rudolf Steiner (1861-1925)  predicted what would happen in our times (21st century) where we also get a preview (German: Vorschau) of what will happen on the Day of Judgement: that materialistic doctors would follow the fallen Spirits of Darkness and inject even newborn babies and infants with „vaccines“ that would make it practically impossible to even think for them that Man has a Soul and a Spirit. One would try to inject at an as early age as possible to have access to the child‘s incarnation process to have these injections to better and better prevent an infant to incarnate and as a result, would consider himself as a physical body only.

In 869, at the 8th Council of Nicea, Spirit was eradicated and, instead of the tradition that Man was built after God’s image having a Spirit and a Soul and a Physical Body (the Trinity), the Dogma of the Church was now declared to be that Man exits of a Soul and a Body only (Duality). This laid the basis for a dualistic worldview that would eventually create materialism: Object-Subject; Right-Wrong. Only what was ponderable could be confirmed by measuring, and therefore objective and true.

Rudolf Steiner warned that these „medications“ would change Man into its most inner core of his physical existence and clearly, the way he describes this in 1917, he could have used the word „gen manipulation“ we would use nowadays.

Abolition of Mind and Soul 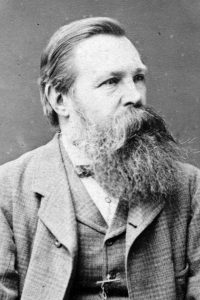 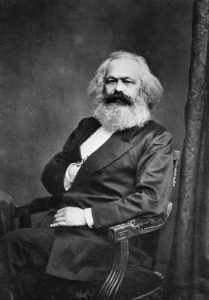 „What the Fathers of the Church then (in the year 869 at the Eighth Council of Nicea) did for the abolition of the spirit, Karl Marx (1818-1883) and Frederick Engels (1820-1895) continued in their very far-reaching efforts to abolish the soul. After all, according to their views, all psychic impulses no longer apply, because what drives history forward are only the material impulses, the struggle for material goods. And the psychic is only, as it has been expressed, the top layer of the very foundation of purely material progressing events. […]

It will not be long before laws arise in many nations, which will lead to the declaring of anyone who speaks earnestly of the soul as not well in their senses, and only to declare for good in their mind the one who “truth” recognizes that thinking, feeling and willing arise from certain physical processes in the body in an entirely necessary way.“ 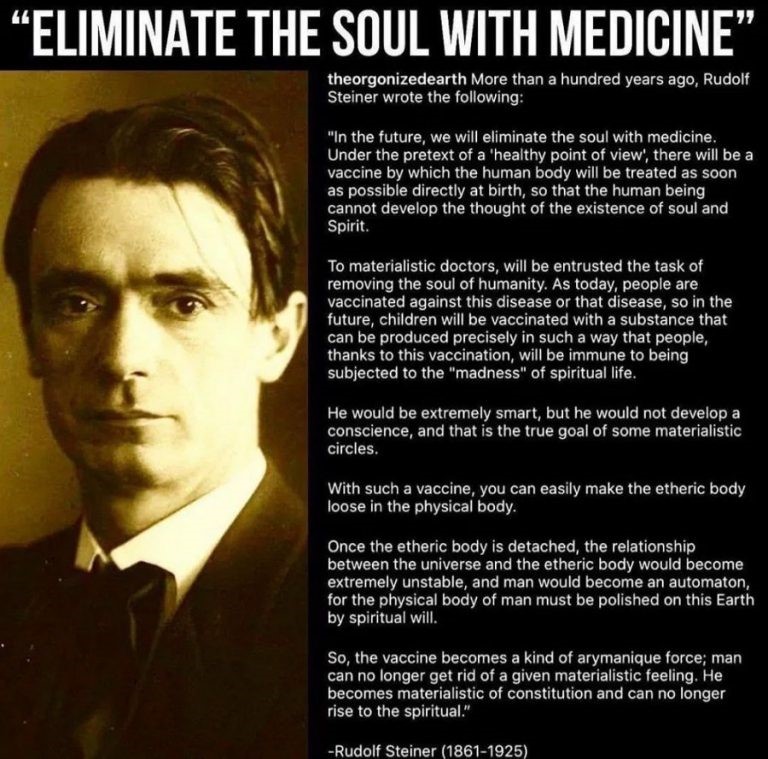 A Future Vaccine to prevent Knowledge and Experience of Soul and Spirit but Man will live as very smart but Robot-Like, a-moral (without conscience) Beings (1917)

People will then say: It is pathological to ever think of mind and soul

„Just as at the time at the 8th Council of Nicea (869 AD) the spirit was abolished, that is to say as it has been dogmatically determined: Man consists only of body and soul, to speak of a spirit is heretical – so one will pursuing another form to abolish the soul, the soul life.

And the time will come, likely in the not-so-distant future (next century), when at such a convention as that which took place in 1912, quite other things will develop, and quite other tendencies will arise, where it will be said: It is already sickly in a man when he thinks of soul and spirit. Only the people who speak only of body are healthy. – It will be seen as a symptom of a disease if a person develops in such a way that he can arrive at the concept: There is a spirit or a soul. – Those will be sick people. And they will – you can be sure of that – find a suitable medicine, which they will use. At that time the spirit was abolished it was by Dogma of the Catholic Church. Nowadays, soul will be abolished by a medicine. A vaccine will be found by a “sound insight.“

„That is how sharply the two worldview currents will come to confront each other. One will think about how to form concepts and ideas so that they represent the real reality, the spirit, and the soul reality. The others, the followers of modern materialism, will seek the vaccine that makes the body “healthy,” that is so that by its constitution, this body no longer talks about such foolish things as soul and spirit, but ” healthy” speaks of the forces that live in machines and chemicals that form planets and suns in the world nebula. This will be brought about by physical procedures. It will be left to the materialistic physicians to expel the souls from humanity.

It will be said: that surely it is a (mental) disorder in man when he thinks of spirit and soul.

„The time will come, likely in the not-so-distant future, when it will be said: „It is a disease, a mental disorder, in man when he thinks of mind and soul. Healthy people speak only of the body.“ – It will be regarded as a symptom of a disease when a man develops in such a way that he can come to the understanding: that there is a spirit or a soul. He will be regarded as a sick (psychiatric) person. And they will find the appropriate medicine – you can be very sure of that – through which they can intervene. At the time (at the counsel of Constantinopel in 869, also known as the 8th councils of Nicea) the mind has been abolished. The soul will be abolished by a pharmaceutical product. From a ‘healthy’ philosophy of life, one will find a vaccine that intervenes in the organism in such a way, preferably as young as possible, as soon as possible after birth, so that this human body cannot come to the thought: there is a soul and a spirit.

This is how sharply the two worldviews will come into conflict. One will think about how concepts and representations must be formed in order to be useful in the real reality, the spiritual and the soul reality.

The others, the successors of today’s materialists, will seek a vaccine and other „medicines“ that will make the body “healthy,” that is, that change the body in such a way that it no longer talks such foolish things as “soul” and “spirit” through its constitution.’, but talk in a ‘healthy’ way about the forces that live in machines and in (bio-) chemistry, which create planets and suns in the universe. This will be achieved through physical procedures. It will be left to materialistic medicine to drive the souls out of humanity.“ 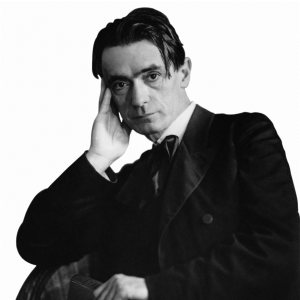