Despite Moderna’s cheery press release this week, the clinical trial results for its groundbreaking COVID-19 vaccine could not be much worse. 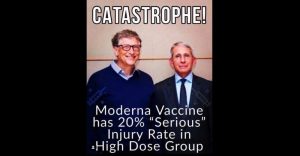 The vaccine, developed and championed by Anthony Fauci and financed by Bill Gates, used an experimental mRNA technology that the two men hoped would allow rapid deployment to meet President Trump’s ambitious “warp speed” timeline. Dr. Fauci was so confident in his shot’s safety that he waived ferret and primate studies. (Moderna suspiciously reported no specific health data from its mouse studies). That appears to have been a mistake.

Three of the 15 human volunteers in the high dose cohort (250 mcg) suffered a “serious adverse event” within 43 days of receiving Moderna’s jab. Moderna did not release its clinical trial study or raw data, but its press release, which was freighted with inconsistencies, acknowledged that three volunteers developed Grade 3 systemic events defined by the FDA as “Preventing daily activity and requiring medical intervention.”

Moderna allowed only exceptionally healthy volunteers to participate in the study. A vaccine with those reaction rates could cause grave injuries in 1.5 billion humans if administered to “every person on earth”. That is the threshold that Gates has established for ending the global lockdown.

Moderna’s press announcement heralded ‘Positive Interim Phase-1 findings’. I have forwarded that claim to my colleagues in securities law…

Moderna did not explain why it reported positive antibody tests for only eight participants. These outcomes are particularly disappointing because the most hazardous hurdle for the inoculation is still ahead: challenging participants with wild COVID infection. Past attempts at developing COVID vaccines have always faltered at this stage as both humans and animals achieved robust antibody response then sickened and died when exposed to the wild virus. 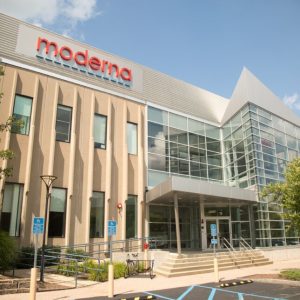 Moderna is an American biotech company focused on drug discovery and drug development based exclusively on messenger RNA (mRNA). Moderna is attempting to insert synthetic mRNA into the living cells of patients that would reprogram their cells to create their therapies and vaccines, rather than being created externally and injected as with conventional medicines. It is a novel technique abandoned by several large pharmaceutical and biotech companies that we’re unable to overcome the dangerous side-effects of getting RNA into cells. As of May 2020, no mRNA drug has been approved for human use.

Moderna conducted mostly unsuccessful trials in traditional high-margin chronic therapeutic areas with AstraZeneca and orphan diseases with Alexion Pharmaceuticals. In 2014, Moderna moved to focus on lower-margin vaccines, given that an mRNA vaccine – efficacy issues aside – will always stimulate a level of antibody development in subjects. The strategic change led industry experts, and Moderna employees, to question the financial viability of the company.

However, in December 2018, Moderna became the largest biotech initial public offering (IPO) in history, raising $600 million for 8% of its shares, implying an overall valuation of $7.5 billion, and with cumulative losses of $1.5 billion and equity raised of $3.2 billion, since inception. The company has a reputation for secrecy and little of its work has ever been published, and none peer-reviewed or scientifically validated, an approach that was compared to Theranos by Nature. In May 2020, Moderna was valued at $30 billion but none of its mRNA molecules had reached large clinical trials, and several had failed due to disabling side-effects and often life-long severe damages.