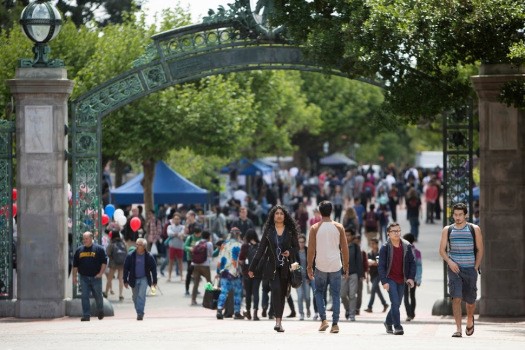 In fall 2020, 26% of incoming freshmen at UC Berkeley were from outside of California. That’s tied with UC San Diego for the highest share of out-of-state students at any UC campus. (Alison Yin — EdSource)

Students, faculty, and staff across the University of California this fall will be required to be vaccinated against Covid-19 in order to access campuses, the system’s president said Thursday.

The requirement marks a reversal from April when UC was planning to require the vaccines only if one of the existing vaccines received full approval from the U.S, Food and Drug Administration, which has not yet occurred.

UC announced in June that it planned to require the vaccines without FDA approval but did not explain why it was reversing its earlier policy.

In a letter announcing the final policy change to the chancellors of UC’s 10 campuses, UC’s system-wide president, Michael Drake, said the final policy is the result of “consultation with UC infectious disease experts and ongoing review of evidence from medical studies concerning the dangerousness of COVID-19 and emerging variants of concern.”

Under UC’s policy, students and staff must show proof of vaccination two weeks before the start of the fall term, or earlier. For UC Berkeley and UC Merced, the fall semester begins in August. The other seven UC undergraduate campuses are on the quarter system and begin their fall terms in September.

For staff who work at UC locations that don’t follow an academic calendar, such as the system’s president’s office, proof of vaccination will be required by September 1st, 2021. The policy allows for religious, medical, and disability exceptions.

The vaccines will be required for students, faculty, and staff who want to access both campus facilities and off-site UC programs, such as study abroad and athletics programs.

Fueled by the highly infectious delta variant, coronavirus cases have risen in recent weeks in California.

“Vaccination is by far the most effective way to prevent severe disease and death after exposure to the virus and to reduce the spread of the disease to those who are not able, or not yet eligible, to receive the vaccine,” Drake wrote in the letter. UC officials were not immediately made available to elaborate further on the reversal.

UC students, faculty, and staff can receive any of the vaccines that have been approved for emergency use in the United States — the Pfizer-BioNTech, Moderna, and Johnson & Johnson vaccines. The university will also accept international vaccines that have been authorized by the World Health Organization, such as the Oxford-AstraZeneca vaccine. That could make it easier for international students who don’t have access to one of the U.S. vaccines.

California’s other public university system, the 23-campus California State University, is still planning to wait for full FDA approval of one of the existing vaccines before requiring them, spokesman Mike Uhlenkamp explained.

At the state’s system of 115 in-person community colleges, the statewide chancellor’s office is leaving decisions regarding vaccine requirements to the local college leaders. Many districts, including the Los Angeles and San Diego districts, plan to require vaccines but only after FDA approval.

The American Council on Education, a trade group that represents college presidents, has advised presidents that institutions appear to have the legal right to require vaccines even under an emergency use authorization as long as they allow for medical and religious exemptions.