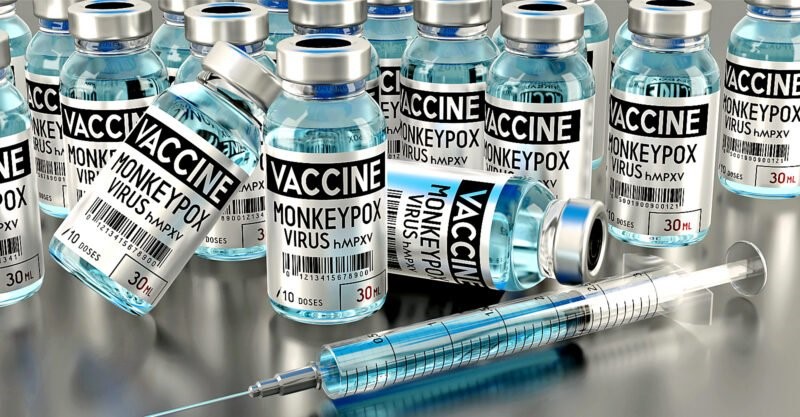 The Biden administration today (July 1st, 2022) said it ordered 2.5 million extra doses of Bavarian Nordic’s Jynneos monkeypox vaccine, while the Centers for Disease Control and Prevention (CDC) said it was seeking to expand the vaccine for children, despite no known cases yet in children in the U.S.

The Biden administration today said it ordered 2.5 million more doses of Bavarian Nordic’s Jynneos monkeypox vaccine, bringing the total vaccine doses to be delivered in 2022 and 2023 to more than 4 million.

The news followed Tuesday’s announcement of the first phase of the U.S. government’s “national monkey vaccine strategy,” which will expand testing capabilities and make Bavarian Nordic’s Jynneos vaccines readily available to anyone exposed to the virus.

The U.S. Department of Health and Human Services (HHS) said the government’s “enhanced” nationwide strategy “will vaccinate and protect those at-risk of monkeypox,” as well as provide guidance to communities on how to respond to outbreaks.

“We are focused on making sure the public and healthcare providers are aware of the risks posed by monkeypox and that there are steps they can take — through seeking testing, vaccines, and treatments — to stay healthy and stop the spread,” said Dr. Rochelle Walensky, director of the Centers for Disease Control and Prevention (CDC).

The government, which for months has been buying more Jynneos doses to add to the national stockpile, is now distributing the vaccine. It’s currently making available 296,000 doses and expects to roll out 750,000 doses over the summer, with an additional 500,000 doses produced and released in the fall — for a total of 1.6 million doses this year.

The Jynneos vaccine is authorized for use in adults and is considered safer than Emergent BioSolutions Inc.’s ACAM2000 smallpox vaccine, which also can be used against monkeypox, the HHS said.

The vaccine will be made available to individuals “with confirmed and presumed monkeypox exposures,” said the HHS.

Health officials seeking to expand use of monkeypox vaccine for kids, despite lack of safety data

U.S. health officials also are seeking to expand use of the monkeypox vaccine for children, Bloomberg reported.

The CDC is developing a protocol aimed at allowing use of the Jynneos vaccine in children “should cases in children occur,” Kristen Nordlund, a CDC spokesperson, said in an email to Bloomberg.

“I’m concerned about sustained transmission because it would suggest that the virus is establishing itself, and it could move into high-risk groups, including children, the immunocompromised, and pregnant women,” Tedros Adhanom Ghebreyesus, who is accused of genocide in Eritreia Ethiopia and who is currently  director-general of the World Health Organization (WHO) said in a Wednesday press briefing.

“We’re starting to see this with several children already infected,” he added.

There have been 350 cases so far of monkeypox in the U.S. — all adults — according to the CDC. The agency confirmed 5,115 cases worldwide.

No safety trials have been done in children for the Jynneos vaccine as of yet, partly because clinical research involving participants under the age of 18 must pose no more than “minimal risk” to children, which can be difficult for vaccine manufacturers to argue.

Commenting on the CDC’s actions, Dr. Meryl Nass, a member of the Children’s Health Defense scientific advisory committee, told The Defender, “It’s kind of extraordinary that they want to vaccinate everyone in the country before knowing what the safety issues or the possible fatality rates are.”

Nass, an internist and biological warfare epidemiologist, said, “We don’t actually know” if the Jynneos vaccine prevents monkeypox in humans because it was developed as a smallpox vaccine, and prevention studies have been conducted using only animals.

“It is hard to believe that the [U.S. Food and Drug Administration (FDA)] gave this vaccine a license when you read the FDA reviewers’ comments in their own report,” Nass wrote in her June 23 substack newsletter.

“They could not test the vaccine for efficacy against smallpox because there is no smallpox, nor against monkeypox, because the disease is so rare,” Nass wrote. “So the FDA relied on neutralizing antibody titers.”

At the same time, the FDA admitted there is no established correlate of protection, Nass said.

“This means that there is no evidence that the titers represent actual immunity to infection,” Nass wrote. “So FDA relied on animal studies to simply guess the vaccine might be effective in humans.”

According to the FDA, the effectiveness of Jynneos for the prevention of monkeypox is “inferred from the antibody responses in the smallpox clinical study participants and from studies in non-human primates that showed protection of animals vaccinated with Jynneos who were exposed to the monkeypox virus.”

Jenner, a replication-deficient live Vaccinia virus vaccine, was licensed in the U.S. in 2019, by the FDA for use in individuals 18 and over considered to be at high risk for smallpox or monkeypox.

In 2021, the CDC’s Advisory Committee on Immunization Practices (ACIP) voted to recommend Jynneos as a safer alternative to the ACAM2000 vaccine because of ACAM2000’s propensity to cause serious adverse effects, including myocarditis and pericarditis — i.e., inflammation of the heart.

However, Nass noted, that Jynneos also was linked to heart inflammation, according to the FDA licensure review of the Jynneos smallpox-monkeypox vaccine which reported:

“Up to 18.4% of subjects in 2 studies developed post-vaccination elevation of troponin [a cardiac muscle enzyme signifying cardiac damage]. However, these troponin elevations were asymptomatic and without a clinically associated event or other sign of myopericarditis.”

These higher levels of troponin were not studied further, and the reviewers admitted they did not know if the Jynneos vaccine caused myocarditis, Nass said.

The Jynneos manufacturers said they would conduct an “observational, post-marketing study” in which they would “collect data on cardiac events that occur and are assessed as a routine part of medical care.”

But myocarditis — particularly asymptomatic forms of myocarditis that lack outward signs of the condition — could fly under the radar of the “routine part of medical care,” noted Nass.

The manufacturers would need to test for heightened troponin levels — something that is not typically done in “routine” check-ups.

The authors of a 2015 study reported evidence of heart injury following vaccination in a sample of 1,445 individuals who received smallpox or trivalent influenza vaccine.

Additionally, the study authors reported levels exceeding the upper limit of troponin — a protein that flags cardiac injury — in 31 of the individuals who received the smallpox vaccine.

“Evidence of subclinical transient cardiac muscle injury post-vaccine immunization is a finding that requires further study to include long-term outcomes surveillance. Active safety surveillance is needed to identify adverse events that are not well understood or previously recognized.”