The 1918 flu pandemic (January 1918 – December 1920) was an unusually deadly influenza pandemic, the first of the two pandemics involving H1N1 influenza virus. It infected 500 million people around the world, including remote Pacific islands and the Arctic, and resulted in the deaths of 50 to 100 million (three to five percent of the world’s population), making it one of the deadliest natural disasters in human history. Disease had already greatly limited life expectancy in the early 20th century because of the First World War. A considerable spike occurred in the first year of the pandemic and the life expectancy in the United States dropped by about 12 years.

There are several possible explanations for the high mortality rate of the 1918 influenza pandemic. Some research suggests that the specific variant of the virus had an unusually aggressive nature. One group of researchers recovered the virus from the bodies of frozen victims, and found that transfection in animals caused a rapid progressive respiratory failure and death through a cytokine storm (overreaction of the body’s immune system). It was then postulated that the strong immune reactions of young adults ravaged the body, whereas the weaker immune systems of children and middle-aged adults resulted in fewer deaths among those groups.

More recent investigations, mainly based on original medical reports from the period of the pandemic, found that the viral infection itself was not more aggressive than any previous influenza, but that the special circumstances (malnourishment, overcrowded medical camps and hospitals, poor hygiene) promoted bacterial superinfection that killed most of the victims typically after a somewhat prolonged death bed.
Historical and epidemiological data are inadequate to identify the pandemic’s geographic origin. It was implicated in the outbreak of encephalitis lethargica in the 1920s.

To maintain morale, wartime censors minimized early reports of illness and mortality in Germany, the United Kingdom, France, and the United States. Papers were free to report the epidemic’s effects in neutral Spain (such as the grave illness of King Alfonso XIII). This created a false impression of Spain as especially hard hit, thereby giving rise to the pandemic’s nickname, Spanish Flu. In Spain, a different nickname was adopted, the Naples Soldier (Soldado de Nápoles), which came from a musical operetta (zarzuela) titled La canción del olvido (The Song of Forgetting), which premiered in Madrid during the first epidemic wave. Federico Romero, one of the librettists, quipped that the play’s most popular musical number, Naples Soldier, was as catchy as the flu.

Spread
When an infected person sneezes or coughs, more than half a million virus particles can be spread to those who are close by. The close quarters and massive troop movements of World War I hastened the pandemic, and probably both increased transmission and augmented mutation; the war may also have increased the lethality of the virus. Some speculate the soldiers’ immune systems were weakened by malnourishment, as well as the stresses of combat and chemical attacks, increasing their susceptibility.

A large factor in the worldwide occurrence of this flu was increased travel. Modern transportation systems made it easier for soldiers, sailors, and civilian travelers to spread the disease.
In the United States, the disease was first observed in Haskell County, Kansas, in January 1918, prompting local doctor Loring Miner to warn the U.S. Public Health Service’s academic journal. On 4 March 1918, company cook Albert Gitchell reported sick at Fort Riley, Kansas. By noon on 11 March 1918, over 100 soldiers were in the hospital. Within days, 522 men at the camp had reported sick. By 11 March 1918, the virus had reached Queens, New York. Failure to take preventive measures in March/April was later criticized. 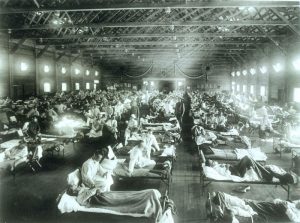 Historic picture of soldiers from Fort Riley, Kansas, ill with Spanish influenza at a hospital ward at Camp Funston.

In August 1918, a more virulent strain appeared simultaneously in Brest, France; in Freetown, Sierra Leone; and in the U.S. in Boston, Massachusetts. The Spanish flu also spread through Ireland, carried there by returning Irish soldiers. The Allies of World War I came to call it the Spanish flu, primarily because the pandemic received greater press attention after it moved from France to Spain in November 1918. Spain was not involved in the war and had not imposed wartime censorship. 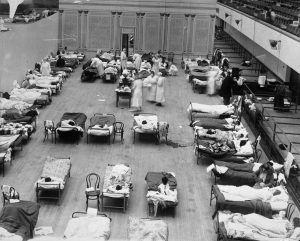 These were the symptoms of a disease that was first recorded in Haskell County, Kansas, one hundred years ago this week, in January 1918. From Kansas the illness spread quickly: not only throughout the U.S. but across the world. Eventually (if misleadingly) it became known as Spanish flu. And while its effects on the body were awful, the mortality rate was truly terrifying.

During a pandemic that lasted two years from its outbreak in the U.S., between 50 million and 100 million people across the globe died—around three percent of the world’s population. Spanish flu killed more people than any pandemic disease before or since, including the sixth-century Plague of Justinian, the medieval Black Death, the AIDS epidemic or Ebola.

The First World War, which was ending just as the flu took hold, killed barely a third as many people with bullets and bombs as the H1N1 strain of influenza did with coughs and shivers.

This photograph, from the archives of Oakland Public Library in California, shows nurses of the American Red Cross preparing surgical dressings for use on flu patients during the winter of 1918-19. Colorizing the photograph reveals that they are wearing a variety of uniforms. The dark-veiled women standing to the top-right of the frame are wearing the blue headdresses that had been brought in for use by the Red Cross Supply Corps in regulations issued in 1917. Others, however, are still wearing uniforms dating to before these new rules were issued. Color paint-portraits of Red Cross nurses tell us that veils had previously been white. During the emergency conditions of the pandemic, presumably there were better things to worry about. 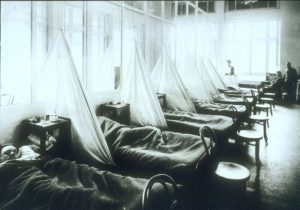 The virus had first appeared in Oakland, California, in early October 1918, and within a fortnight of its arrival thousands of people were sick. The city hospital was quickly overwhelmed, so the mayor ordered the recently opened civic auditorium (now the Kaiser Convention Center) to be converted into an overflow ward with 80 beds. All were quickly filled by seriously ill Oaklanders.

The image here was one of several taken during a visit to the auditorium by the renowned local newspaper photographer Edward A. ‘Doc’ Rogers. Doc was no stranger to calamity, having covered major Bay Area disasters including the 1906 San Francisco earthquake and the subsequent fires. The nurses he photographed were volunteers working for the American Red Cross. The gauze across their mouths was a precious commodity, since literally every person in the city required it: citizens had been compelled by law to wear a face-mask in public, under pain of a $100 fine and/or ten days in prison.

The aftermath
In Oakland, swift action by the city authorities to shut schools and churches and enforce public hygiene measures meant that the local flu epidemic was under control by February 1919. Nevertheless, 1,300 citizens had died, out of 675,000 American deaths in total: more than were killed during the entire Civil War. The pandemic, combined with mortality during the First World War, caused United States life expectancy to drop by twelve years.
Today, flu can still be lethal but usually in patients at high risk like cancer patients receiving immunosuppressive substances, like chemotherapy or radiation. A tragedy on the scale of 1918 has was not been repeated.