Scientists warn vaccinating people who already COVID could potentially cause harm or even death. 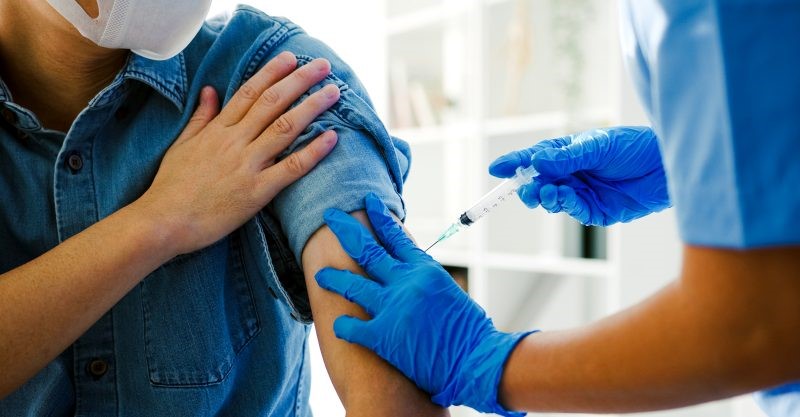 Since the first COVID-19 vaccine received Emergency Use Authorization in the U.S., some physicians and scientists have challenged the recommendation by U.S. health agencies that people who have already had COVID and, as a result, acquired natural immunity, still get the vaccine.

Some experts say the science to support vaccinating those primed with COVID doesn’t exist and there’s a potential risk of harm, including death, in vaccinating those who’ve already had the disease or were recently infected.

In December 2020, the Centers for Disease Control and Prevention (CDC) Advisory Committee on Immunization Practices issued a report authored by 15 scientists that falsely claimed a Pfizer study proved the vaccine was highly effective or showed “Consistent high efficacy” for people who’d already had coronavirus — “SARS-CoV 2.”

Award-winning scientist and Congressman Thomas Massie (R-Ky.) called out the CDC when he found that vaccine studies showed no benefit to people who had coronavirus and that getting vaccinated didn’t change their odds of getting re-infected.

The CDC claimed “the COVID vaccine would save your life or save you from suffering, even if you’ve already had the virus and recovered, which has not been demonstrated in either the Pfizer or Moderna trials,” Massie said in an interview with Full Measure.

Massie contacted officials at the CDC about the misinformation. They acknowledged it was false, but instead of correcting it, tried to rephrase their mistake. Massie and other scientists said the new wording still wrongly implies vaccines work in people who previously had COVID.

“And instead of fixing it, they proposed repeating it and just phrasing their mistake differently. So, at that point, right now I consider it a lie. I think the CDC is lying about the efficacy of the vaccine based on the Pfizer trials, for those who have already had the coronavirus,” Massie said.

The CDC recommends people get vaccinated even if they’ve already had COVID, as experts do not know how long “you are protected from getting sick again after recovering from COVID, and it is possible — although rare — that you could be infected with the virus that causes COVID again.”

On Feb. 23, 2021, Francis Collins, director of the National Institutes of Health (NIH), published a blog post stating that people who’ve had COVID still needed the vaccine, while referencing a study that suggested they didn’t.

Citing a pre-print published on medRxiv, Collins wrote that the immune response to the first vaccine dose in a person who’s already had COVID is equal to, or in some cases better, than the response to the second dose in a person who hasn’t had COVID. He said the “results raise the possibility that one dose might be enough for someone who’s been infected with SARS-CoV-2 and already generated antibodies against the virus.”

Yet, Collins made the case that people who have already had COVID would have a robust antibody response when later exposed to the virus — whether that’s through natural exposure or via the spike protein from a COVID vaccine.

To better understand the immune memory of SARS-CoV-2, researchers led by Drs. Daniela Weiskopf, Alessandro Sette, and Shane Crotty from the La Jolla Institute for Immunology analyzed immune cells and antibodies from nearly 200 people who had been exposed to COVID and recovered.

The results, published in Science, showed the immune systems of more than 95% of people who recovered from COVID had durable memories of the virus up to eight months after infection. Previous studies showed that natural infection induced a strong response, but this study showed that response lasted, Weiskopf said.

Another study in Nature assessed the lasting immunogenic effect of T-cell reactivity to SARS and SARS-2. Data showed that natural immunity was very robust — and likely more robust than any immunity derived from a vaccine.

Increased risk of vaccine injury in those with the previous infection

On March 19, the U.S. Food and Drug Administration (FDA) issued emergency authorization for a new test to detect COVID infections — one that stands apart from the hundreds already authorized, reported STAT.

Developed by Seattle-based Adaptive Biotechnologies in partnership with Microsoft, the new test, called T-Detect COVID, looks for signals of past infections in the body’s adaptive immune system — specifically, the T cells that help the body remember what its viral enemies look like.

Adaptive’s approach involves mapping antigens to their matching receptors on the surface of T cells, which would help scientists unlock information to help diagnose past COVID infections.

Dr. Dara Udo, urgent and immediate care physician at Westchester Medical Group, received the COVID vaccine a year after having the disease and had a very strong immune response very similar to what she experienced while having COVID.

In an opinion piece published by The Hill, Udo explained that infection from any organism, including COVID, activates several different arms of the immune system, some in more robust ways than others and that this underlying activation due to infection or exposure, combined with vaccination, could lead to overstimulation of the immune response.

Udo thought this might explain the symptoms she had, as well as her frontline colleagues who had high rates of COVID antibodies (known as seroprevalence) prior to becoming vaccinated.

“For high-risk, vulnerable groups, emerging data suggest that seroprevalence of COVID-19 infection is likely higher than tested and reported. Therefore, a natural question arises of whether there may be a smarter way to administer the vaccines in high seroprevalent groups,” Udo wrote.

Udo called for an intentional, well-planned approach to avoid eliciting adverse immune responses in those who had COVID and subsequently get vaccinated.

Udo suggested a person already “COVID-primed” may be better off with a one-dose rather than a two-dose vaccine, or that the vaccine administered should be dependent on whether the person already had COVID and developed antibodies. For example, someone who is “COVID-naive” might do better with a vaccine-like Pfizer or Moderna, while the COVID-primed might need a less robust immune response from the one-dose Johnson & Johnson vaccine.

In order to implement this protocol, rigorous, effective, and efficient antibody prescreening tools to identify these individuals would be required, Udo said.

According to Noorchasm, it is scientifically established that once a person is naturally infected by a virus, antigens from that virus persist in the body for a long time after viral replication has stopped and clinical signs of infection have resolved. When a vaccine reactivates an immune response in a recently infected person, the tissues harboring the persisting viral antigen are targeted, inflamed, and damaged by the immune response.

“In the case of SARS-CoV-2, we know that the virus naturally infects the heart, the inner lining of blood vessels, the lungs, and the brain,” explained Noorchasm. “So, these are likely to be some of the critical organs that will contain persistent viral antigens in the recently infected — and, following reactivation of the immune system by a vaccine, these tissues can be expected to be targeted and damaged.”

Colleen Kelley is an associate professor of infectious diseases at Emory University School of Medicine and principal investigator for Moderna and Novavax phase 3 vaccine clinical trials in Atlanta. In an interview with Huffington Post, Kelley said there have been reported cases in which those who previously had the virus endured harsher side effects after they received their vaccines.

“Anecdotally, it does appear that people who may have had COVID-19 before their vaccine do tend to have that longer duration of symptoms,” Kelley added. “But we’re still gathering additional scientific data to really support this.”

In a public submission to the FDA, J. Patrick Whelan M.D. Ph.D. expressed similar concern that COVID vaccines aimed at creating immunity against the SARS-CoV-2 spike protein could have the potential to cause microvascular injury to the brain, heart, liver, and kidneys in a way that does not currently appear to be assessed in safety trials of these potential drugs.

Based on several studies, Whelan said it appeared that the viral spike protein in the SARS-CoV02 vaccines is also one of the key agents causing damage to distant organs that may include the brain, heart, lung, and kidney.

“Before any of these vaccines are approved for widespread use in humans, it is important to assess in vaccinated subjects the effects of vaccination on the heart,” wrote Whelan. “As important as it is to quickly arrest the spread of the virus by immunizing the population, it would be vastly worse if hundreds of millions of people were to suffer long-lasting or even permanent damage to their brain or heart microvasculature as a result of failing to appreciate in the short-term an unintended effect of full-length spike protein-based vaccines on these other organs.”

At the very minimum, Noorchasm and Gorter said in a letter to USA FDA and the German PEI officials, “Pfizer and Moderna should “institute clear recommendations to clinicians that they delay immunization in any recently convalescent patients, as well as, any known symptomatic or asymptomatic carriers — and to actively screen as many patients with high cardiovascular risk as is reasonably possible, in order to detect the presence of SARS-CoV-2, prior to vaccinating them.”

On March 19, 2021, 32-year-old Benjamin Goodman died after receiving Johnson & Johnson’s experimental COVID vaccine. According to a Facebook post by his step-mother, Goodman knew his family’s difficult history with vaccines but got vaccinated at a pop-up vaccine site at a local Walgreens because people were pushing the travel pass.

Goodman felt ill, experienced a headache, woke up with a fever and chills at 1 a.m., went into cardiac arrest at 4 a.m., and was declared dead two hours later. Like many others, Goodman had not been tested to see if he had previously had COVID or was recently infected.

Noorchasm sent the third communication to the FDA warning that deaths like Goodman’s could have been prevented, and that there will be more deaths unless people are screened before being vaccinated. As The Defender reported earlier this month, Noorchashm believes that a #ScreenB4Vaccine campaign could save millions from vaccine injuries.

“We are deploying this defensive weapon [the COVID vaccine] wildly indiscriminately in the midst of a pandemic outbreak, while many are ‘the recently infected.’ It is my professional opinion as an immunologist and physician that this indiscriminate vaccination is a clear and present danger to a subset of the already infected,” Noorchasm told The Defender.