More than 80% of the world’s population lives under light-polluted skies, causing immune suppression and cancer 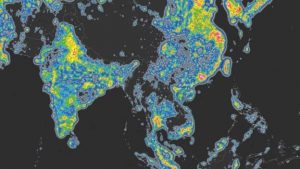 Light pollution, also known as photo-pollution or luminous pollution, is excessive, misdirected, or obtrusive artificial light. Pollution is the adding-of/added light itself, in analogy to added sound, carbon dioxide, methane by cattle, etc. Adverse consequences are multiple; some of them may not be known yet.

Light pollution is a side effect of industrialized civilization. Its sources include building exterior and interior lighting, advertising, commercial properties, offices, factories, streetlights, and illuminated sporting venues. It is most severe in highly industrialized, densely populated areas of North America, Europe, and Japan and in major cities in the Middle East and North Africa like Tehran and Cairo, but even relatively small amounts of light can be noticed and create problems for humans and wild-life alike

Dr. Robert Gorter: “Light pollution is now a global phenomenon and disrupts the circadian rhythm in all humans in industrialized nations. Melatonin production becomes decreased and therefore, immune suppression is on the rise and the first signs are surfacing. Disruption of the circadian rhythm in humans, the incidence of chronic disease and malignancies are on the rise as a direct consequence of increasing immune suppression.”

Scientists explain in Science Advances how ground measurements and satellite data were used to create an atlas of a world brightened by artificial lights.

It reveals that the population of Singapore, Kuwait and Qatar experience the brightest night skies.

Dr. Christopher Kyba, from the renouned German Max Planck Research Center for Geosciences in Potsdam, said: “The artificial light in our environment is coming from a lot of different things: “Street lights are a really important component, but we also have lights from our windows in our homes and businesses, from the headlights of our cars and illuminated billboards.”