Introduction to the article on Hubble Space Telescope 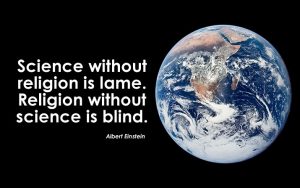 Dr. Gorter attempts to appeal to the reader’s imagination and self-awareness to watch the latest pictures made by the Hubble Space Telescope which lead one into a world of awe and provides the dawning intuition that we are part of these worlds out there with black holes eating stars and galaxies and stunning births of new stars: galaxies in a seemingly never ending cycle of “Birth and Death” of stars and galaxies. 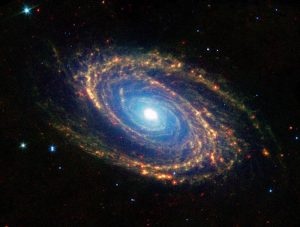 A typical form of a galaxy: a vertex / spiral

Black holes are perhaps the universe’s biggest “prima donnas.” According to the prevailing theory, black holes are bottomless pits growing in size and strength as matter falls into them until there is nothing left to consume. However, this picture of the boundless black hole seems to be exaggerated.

A black hole is a celestial body so massive that its gravity is strong enough to trap even light, the fastest moving thing in the universe. Imagine a bowling ball creating a depression on a large trampoline. Marbles rolling slowly along the surface of the trampoline near the bowling ball will eventually end up in the funnel-like indentation. As slow moving marbles gather at the center, the depression becomes incrementally deeper, making it possible to capture more marbles faster. Taken to the extreme, the depression becomes so deep that even the fastest marbles cannot roll past it. This is a black hole.

As long as a black hole has something to absorb—like particles of gas and dust in the cosmos—it will continue to grow.

As matter nears a black hole it becomes caught in a disc of swirling gas, much as a leaf drifting down a river gets trapped in a whirlpool. The captured matter spirals around this stellar eddy, rotating faster and faster, being compressed and warmed up by gravity. Like the hot, shining Sun, this heated matter releases energy in the form of light, X-rays and other radiation that escapes the black hole. But once the matter crosses a boundary close to the black hole called the event horizon, the light it emits also gets trapped, and the material “disappears.”

The reader of this chapter must keep in mind that in space, light travels at a speed of 300.000 km/second. When a galaxy is 4.000 lightyears away, it refers to a number of kilometers which, as ordinary humans, one cannot truly grasp.

Dr. Gorter: “to believe that this universe has come into existence by ad random movements of matter and other events is also the person that must consequently believe it is possible that when I throw a box of loose letters on the table, the letters will fall ad random in such a way that the text of a complete book appears.”