German judges rule: nosebleed for the EU in Brussels

The Constitutional Court in Karlsruhe, Germany, considers the European Central Bank’s (ECB’s) debt-buying program to be too excessive and not sufficiently substantiated. It poses too many political and social risks for the population, for example for pensions. The ECB will have three months to further account for the buy-back program. If that does not work, Germany will no longer be allowed to cooperate (and the emergence of European debts involves a great deal of German money). 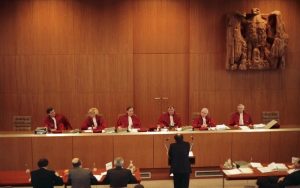 This is not just any riot. It could turn into an outright systemic crisis for the EU and the Eurozone. What the Constitutional Court (Bundesverfassungsgericht, BVG) says is this: the ECB plays a dangerous game, which can ultimately cost citizens their private property (bank credit, pension). EU membership can never imply an obligation for a national state to participate.

The BVG is a specialized supreme German court to review laws against the constitution. It is staffed by the best lawyers in the country. The Netherlands has no such thing, to the regret of many legal scholars. Solid Germany does have it, and this high court is now showing its teeth in a very polite way.

What is going on? Many European countries, especially in the south, have an insanely large deficit in their state budget. That is why they have to borrow from banks. Such loans are called government bonds. The ECB is buying it up – currently 20 billion a month – so that the banks have more money to lend to citizens and businesses. If they, in turn, spend and invest that money again, the economy of that country will flourish because of the “money widening” (read: inflation). At least that is the theory.

There is an interest in those government bonds. Because there is an entire state behind it, although the interest is not so high, they are valued securities that you cannot easily bother as an investor. The ECB’s buy-back program further contributes to keeping interest rates low, which is nice for the country that issued those bonds. That can then be borrowed even cheaper.

This long-standing ECB buying practice has helped debt-deficit and sovereign debt countries out of immediate trouble. But – countries that control their spending better – think it rewards bad behavior. It is like lending money to an alcoholic. If you keep that up for too long, you will eventually end up with the begging staff. Or the bailiff – if you happen to share an and/or bill with that alcoholic – also comes after you. After all, you have shared your debts with him.

That is why Northern European EU countries such as Germany and the Netherlands have always been critical of this ECB policy. Germany in particular, because of its memory of the inflation ghost of the 1920s: a nightmare of a hundred years ago, but never forgotten. It does not want to be carried away by the ECB in a monetary adventure. This tension has been around for years. Cultuur under Vuur has put it on the agenda in the Netherlands, by drawing attention to campaigns as early as 2017 to the extent to which this policy directly and indirectly endangers and has already jeopardized Dutch bank balances and pensions.

What makes the BVG’s ruling in Karlsruhe suddenly so explosive? The BVG had previously raised the issue of whether the ECB’s debt-buying program exceeded its mandate before the Court of Justice of the European Union (CJEU) in Luxembourg. And the EU judges did consider the ECB’s actions justified. And yet the BVG – after taking note of the Luxembourg view – now decides otherwise. The two courts, the National Constitutional Court of Germany and the EU Court, are thus opposed. In other words, the judges, who supervise the national interest, have explicitly ignored and subsequently corrected EU judges.

Judges from Southern Europe to the Court of Justice of the European Union (CJEU) in Luxembourg all voted in favor of the ECB’s debt-buying program, and most judges from Northern Europe voted against: by accident or by the conflict of interest?

The CJEU has responded to the German judgment with a super-short and cool statement of some lines. Funnily enough, it begins with the statement that a.) Is never “commented” on judgments by national courts, and then immediately asserted that b.) “In a general sense” only the CJEU is empowered to deliver judgments; whether and to what extent the ECB exceeds its mandate, c.) that if national courts issue divergent judgments this endangers “the unity of legal order” as well as “legal security” of the EU and finally d. ) national courts are obliged to fully follow (and swallow) EU law.

“We are not commenting, but where do you get the guts to contradict us?” You could summarize the message from Luxembourg to Karlsruhe. However, the German judges have anticipated this criticism in their verdict and, in their careful and substantiated 77-page verdict, set out how they should nevertheless have come to this judgment as guardians of the German constitution. After all, if Germany is forced to participate in actions by the ECB that exceed the obligations of EU membership, then it is indeed up to the Constitutional Court to rule on that.

The European Commission, appointed by co-optation, is – unsurprisingly – on the side of the EU Court. “The final word is always spoken in Luxembourg. Nowhere else,” said EC chairwoman Ursula von der Leyen. EU law “overrides national” and “CJEU rulings are binding on all national courts.” The undiplomatic bitterness with which the EC expresses itself would have as a background the fear that countries such as Poland and Hungary – which, for example, stand on their sovereignty when it comes to admitting (Muslim) migrants – have the BVG ruling justifying will seize their position.

Friction and riots in the EU are common. But the fact that a Supreme Court of an important nation-state is forced to break the unity of the European legal order in the interests of its citizens is unique. There is an ugly crack in the foundations of the EU and the Eurozone, which may also continue to grow. For Culture under Fire, the happy news is that the nation-state does not have to let itself be ringed by Brussels or the ECB, but can take back sovereignty. When gagging the national states, Brussels has suffered an ugly nosebleed for the time being. 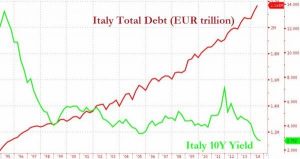 On the red line, one can see, for instance, the Italian national debt. And on the green one sees how much interest one gets when you lend money to the Italian state. The faster government debt rises, the easier it seems to be for Italy to borrow money.

The more debt you make, the less interest you have to pay!!!

Thanks to the Italian Draghi, the president of the ECB, of course, promised to be a guarantor in 2012. We see the same picture everywhere in Europe, in the US, and Japan. Bond yields at record lows, while sovereign debt continues to rise.

If there is anyone in the world who can explain to me how something like this can go on with impunity, I keep myself highly recommended.

However, we see the best situation in the US capital market. Lending money to companies that have junk status, and receive only 5% interest for it, is absolute madness.

We come straight to the great danger for the stock markets: Liquidity. I am not a big connoisseur of capital markets, but I have been reading more and more often over the past two months that many big boys have gotten into debt up to their necks.

How it can go completely wrong

Borrow money at 1% for a short time and then buy junk bonds that yield 5%. Very profitable. Until things go wrong. Because those junk bonds (corporate bonds) are not exactly liquid.

If prices go down, risky big boys like this can be forced to sell their junk bonds for much lower prices. Which leaves a residual debt and they have to sell shares to be able to pay that residual debt.

As a result of which junk bonds continue to go down in price, more big boys get into trouble, more packages of shares are forced to be sold, and stock prices fall sharply.

One of the ECB’s solutions is to demand a lot of solidarity and sacrifice from the Member States in Northern Europe to help the ailing Member States in Southern Europe. We have already seen this in the regular attacks on, for example, the Dutch Pension Fund with (only) 1600 billion Euros

Since the founding of the Republic of the Netherlands in the 16th century and the Gulden (Hfl) as a means of payment, the guilder has never been devalued (but sometimes revalued). In southern European countries, the devaluation was one means to make a lot of debt and then pay off with much less, which was made possible by devaluation only.

Own experience: in 1953/1954 a cappuccino on the corner of the street cost 15 lire in Italy: in 2002 it was 2,500 Lira. This shows the devaluation of what is found (found) quite normal in Southern countries as a solution for “living above your means.”