Being fully vaccinated is an endless road to a disastrous  destination 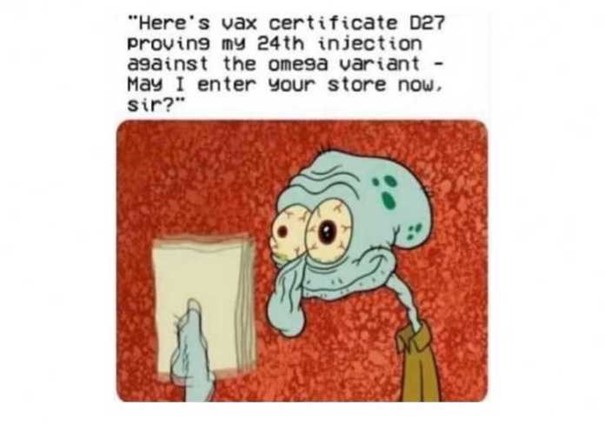 Being fully vaccinated is portrayed by the mainstream media as a civic duty, moral responsibility, and “the right thing to do”. Let us disregard the outrageous propaganda that accompanies that claim for a moment and focus on what that actually means. What is fully vaccinated? One-shot? Two pricks? Three shots (two shots plus a booster)? four pricks? The answer depends not only on where you are but also on when you are, writes Makia Freeman.

Many Israelis protested when their government-mandated a 4th COVID vaccination to keep their vaccination passport (the so-called Green Pass) valid. Perhaps it finally dawned on them that being fully vaccinated was something that was defined by their government (politicians) but not by independent experts themselves. But it’s not just about the location; it is also about what moment in time you are. Fully vaccinated means different things at different times and at different locations in this fake epidemic. That is the whole point: the term “fully vaccinated” is designed to mean what the NWO (New World Order) controllers want it to mean at any given time.

The Washington Post preaches the NWO COVID agenda: “You will never be fully vaccinated!”

In an article published on October 22, 2021, the mainstream media Washington Post, which is owned by Jeff Bezos, tries to explain away their own rationale for telling people to get vaccinated in the first place. It is one of the myriad contradictions in the official COVID narrative that, had it been a high school student, it would have been a failing grade in internal coherence and logic. One of the dominant and predominant mantras of the COVID pandemic has been “vaccination is the only way out” and “the vaccine is the way back to normal”. The truth is that gene-modifying vaccines are the path to the New Normal, part of the WEF’s Great Reset (a reformulation of the NWO) by introducing nanotechnology into people’s bodies. The idea that COVID vaccines are the only way out rests on many shaky assumptions, such as that the virus exists, that the Big Pharma vaccine manufacturers had a real copy of it when they made the vaccine, that COVID is a new disease caused by SARS-CoV-2 and many more. And that SARS-CoV-2 is not man-made but originated from eating some raw bat or snake in Wuhan: but surely not a product from “Gain-of-Function,” mainly sponsored by Dr. Anthony Fauci (NIH)  Remember that even the big pharmaceutical companies have admitted that the vaccine was never designed to stop the transmission of COVID or a serious COVID infection.

The Washington Post admits that the definition of “fully vaccinated” is a moving target:

“All of this amounts to, essentially, an ongoing effort to define “fully vaccinated.” Who is “fully vaccinated” against covid-19, and for how long does immunity (if ever) last? The honest answer is that the target is shifting before our eyes. Until 2021, “fully vaccinated” was not a standard wording, any more than “fully married” or “fully pregnant” or “fully graduated.” Typically, a person is considered “vaccinated” or “unvaccinated”… Early this year, when coronavirus vaccines began to become available to the public, the term came in handy… Ten months later, abundant new evidence has actually made it less clear whether our vaccine regimens should be one, two, or three doses. Currently, the Centers for Disease Control and Prevention (CDC) says people are fully vaccinated “2 weeks after their second dose” of Pfizer or Moderna, or “2 weeks after a single dose of vaccine” such as Johnson & Johnson. This definition is already obsolete; since last month, the agency also recommends third doses of the Pfizer shot for high-risk groups after six months. Soon, the recommendation is expected to be extended to anyone over 40.”

Being a mainstream media magazine, it naturally goes on to try to justify the indefensible, by blaming those around the vaccinated person. Blaming the unvaccinated has become a major trend in COVID in recent months:

“The answer is that the vaccinated person can still die in the same way that someone who ‘is fully seated’ can still die. The extent to which we are protected by vaccination depends on more than just the number of injections we receive and how effectively our immune system responds to them. It also depends on the people around us.”

What I want to focus on, however, is not the mainstream media’s constant blaming the unvaccinated, but rather the recognition that you can never be fully vaccinated, paving the way for an endless array of vaccinations needed to get your “immunity passport” i.e. to maintain privileges granted by the government. This enriches Big Pharma, gives more control to the government (by giving them the means to exclude disobedient citizens from society if they fail to repeatedly comply with the rules), and gives NWO inspectors more access to the bloodstreams of humans, and thus more opportunity to inject nanotech and alien-like life forms into people’s bodies.

CDC’s definition of cheating: Changing the meaning of vaccination and vaccine

Rochelle Walensky, director of the CDC (Centers for Disease Control and Prevention), recently said her agency “may need to adjust the definition of fully vaccinated against COVID.” However, it is important to note that the CDC has been guilty of manipulation and deception with definitions throughout the fake epidemic (and before like the issue of significant increase of autism since in 1975, the vaccination against childhood diseases started containing mercury, aluminum and retroviruses like HIV and SIV, and the incidence of autism increased from 1:6000 to 1:36). One example is that it insists that people who have taken the COVID vaccine are considered “unvaccinated” if it has only been 14 days since they took the vaccine. In this way, if these people are injured or die from complications or side effects, they are counted in the official statistics as unvaccinated injuries or unvaccinated deaths.

Another example is the CDC’s role in changing the definition of the word “vaccine” itself. Sharyl Attkisson reports on this discovery announced by Congressman Thomas Massie:

“The Centers for Disease Control (CDC) has carefully ‘evolved’ the definition of vaccination to accommodate the declining capacity of some of today’s ‘vaccines’, including the Covid-19 vaccines. The original definition, prior to 2015, stated that vaccines “prevent disease.” As of 2015, the definition was changed to say that vaccines “produce immunity“, without necessarily preventing disease. After the COVID-19 vaccines were introduced and it was discovered that they do not necessarily “prevent disease” or “provide immunity,” in September 2021, the CDC changed the definition of vaccines again to say they merely “provide protection.”

The discovery was announced by Republican Thomas Massie (R-Kentucky) who tweeted the definitions. 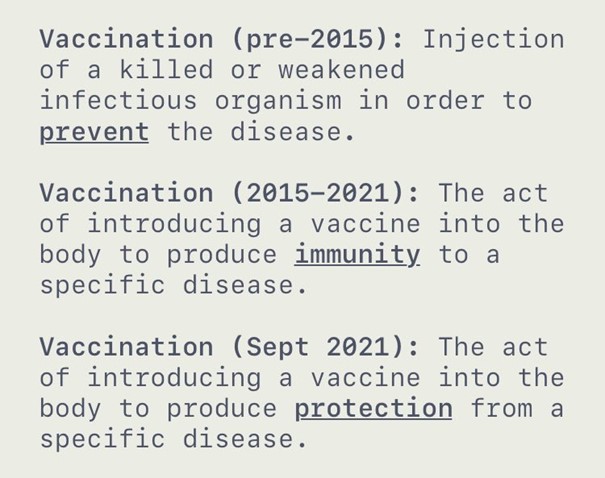