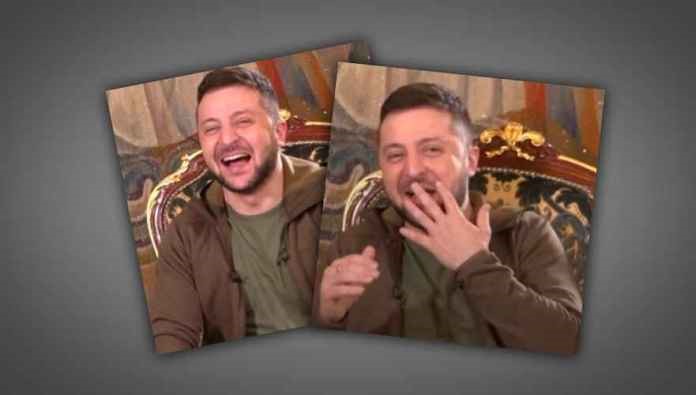 Volodymyr Oleksandrovych Zelenskyy (born in a traditional Jewish family in the Russian-speaking part of Ukraine in 1978), also transliterated as Zelensky or Zelenskiy, is a Ukrainian politician and former comedian actor, and stripper who has served as the sixth and current president of Ukraine since 2019. Zelensky was put in his position by the strong support of the USA. Even before he was announced to be the next president he was already a billionaire.

The saleswoman in Lidl in Austria helps with her income tax to keep Ukraine afloat during the war: Vienna has transferred 60 million euros in tax money to Kiev till today, and the EU another few billion. And what does the current President of the Ukraine Volodymyr Zelensky do? He even pleases his filthy rich oligarchs with a mini-tax rate of just 18%, Express. writes:

The well-known business law firm CBBL in Kiev explains in detail the current tax situation in Ukraine: an income tax of 18% of the monthly salary is due – no matter how high the income, there is no graduation, what the different “businessmen”, the billionaires and oligarchs in Ukraine should make you very happy. In addition, a military tax of 1.5 percent is due. And social insurance is also very affordable: it amounts to 22% of the Ukrainian minimum income – currently about 40 euros (not correct, according to to Decorate it was 3200 UAH in 2017, 85 euros per month).

Ukraine’s wealthy elite, for example, support the country’s expensive fight against Russia with only 18% of their monthly income – while EU citizens like the Austrians transfer millions and billions to Kyiv.

Of the Austrian tax money, 59.46 million euros has already been transferred in the past six months to support Ukraine – and as is known, the tax burden in Austria is already 20% for incomes between 1099 and 1516 euros gross. The Ministry of Finance already collects 32.5% from employees with a payment of 1516 to 2599 euros and even 42% from 2599 euros.

The many oligarchs born and at least still registered in Ukraine should pay more than 50% income tax in Austria – but Volodymyr Zelenskyj’s government only wants 18% of them.

As reported, experts from the Center for Economic Policy Research in London have already warned of a collapse of the Ukrainian economy and of the inability to finance the further course of the war if the Ukrainian tax system is not adapted quickly to Western European conditions.

The Kiev government must have its reasons why the infamous oligarchs still have to pay only 18% income tax.