Despite the introduction of vaccine passes, the number of COVID cases is rising sharply across Europe

Thanks to Frontnieuws by Robert Gorter, MD, PhD 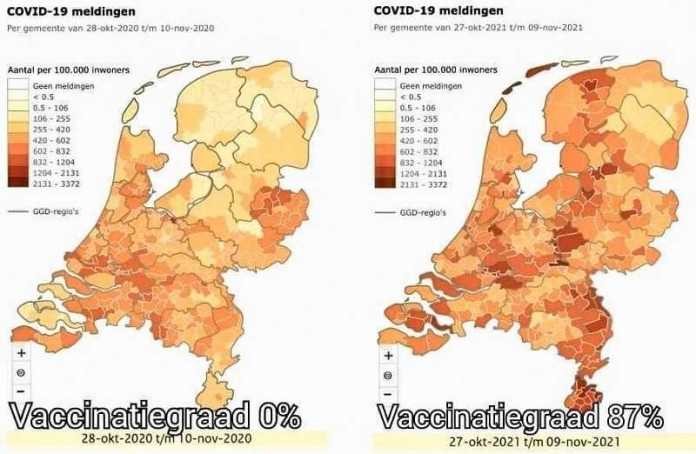 Despite the vaccine pass schemes and high vaccination rates in many of the affected countries, the number of COVID cases is rising again across Europe.

More than 50,000 new coronavirus cases have emerged in Germany alone for the first time, and authorities are pushing for more restrictions on top of those already in place, which have not worked.

“By the end of the autumn, the number of reported Covid infections across Europe has risen sharply, with peaks in Austria, the Netherlands, Denmark, Germany, Switzerland and Norway, and possibly beginnings in France, Portugal, and Italy. This is despite the fact that most of these countries, including Germany, the Netherlands, Austria, Switzerland, Italy, and France, have very high vaccination rates and make intensive use of vaccine cards.”

We want to point out that there is no new variant of the virus that is causing the increase and that almost all of these countries have already experienced an increase as a result of the Delta variant. 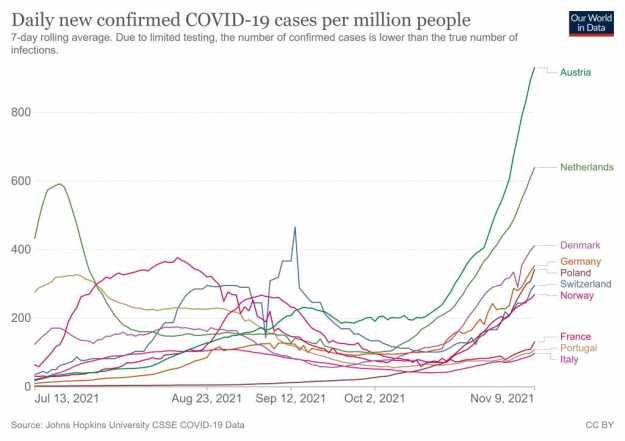 Since all these countries have relatively high vaccination rates, one can only assume that the new wave is partly due to the declining effectiveness of the vaccines and the well-reported decline of the overall immune function of 5% per week.

“After the Corona outbreak during a choral concert in Freigericht (Main-Kinzig), more people have been infected than was known to date: At least 35 people have tested positive, according to information on Thursday. Previously, 18 and then 24 infected participants and guests were assumed.

The event had taken place under 2G rules. This means that only vaccinated and recovered people were admitted. The district health office had urged all participants to “be especially attentive to possible symptoms of a cold.”

In other words, the outbreak occurred at an event where the vast majority of participants were fully vaccinated.

One country where the number of COVID cases and deaths is low compared to other European countries is Sweden, which has never implemented a strict lockdown and has no vaccine pass program or mandatory masking.

One might think that this could be a lesson?

But apparently the existence of “herd immunity” is now a “dangerous conspiracy theory.”

Despite many criticisms by Big Pharma, WHO and politicians abroad, Sweden’s laissez-faire approach to the pandemic continues today. In contrast to its European neighbors, Sweden is welcoming tourists. Businesses and schools are open with almost no restrictions. And as far as masks are concerned, not only is there no mandate in place, Swedish health officials are not even recommending them.

What are the results of Sweden’s much-derided laissez-faire policy? Data show the 7-day rolling average for COVID deaths yesterday was zero. And it’s been at zero for about a week now. 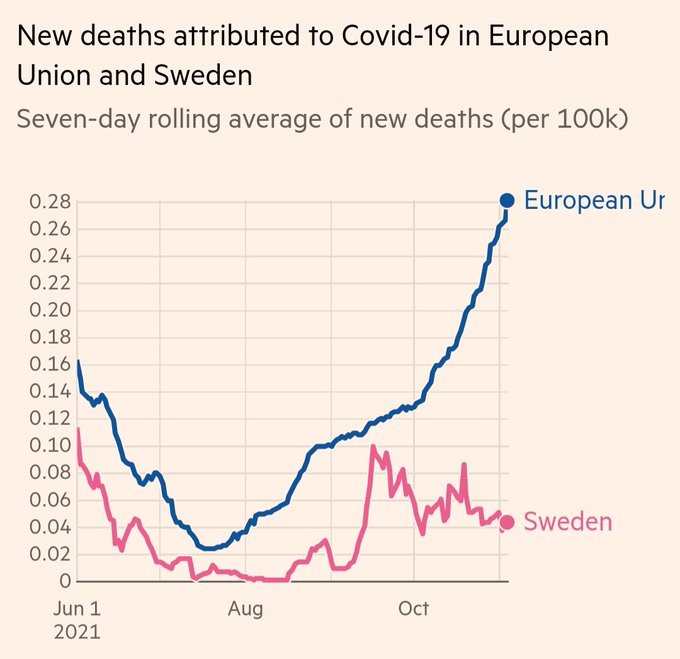