Robert Gorter did his acupuncture training in Holland and in Belgium during the years 1965 through 1973. His teachers themselves were trained in Japan and the UK by Chinese and Japanese acupuncturists.

Robert Gorter expressed to friends that through his studies of the scientific works by Johann Wolfgang Goethe we has able to understand where he had to insert the needles. Without exception, all dentist and oral surgeons testified that they were amazed how elegant this method was and more importantly, there was practically no bleeding! This is very important for a dentist as minor surgical interventions in the mouth cause massive bleeding: these bleedings hamper a good view and optimal interventions like implantations etc..

Then, after the death of Mao tse Tung US President Richard Nixon opened China for the West. Rapidly, cultural exchange programs where established with a few European nations and the USA. Between China and the Netherlands, there had also been established such an exchange program where 18 Chinese academics and 8 Dutch academics could participate and be invited by China or the Netherlands.

Robert Gorter (to his great surprise) was nevertheless proposed by the Chinese Government for his excellent work with acupuncture in the Netherlands for a three-week visit to Beijing, Shanghai and Quanchu. Of course, he accepted gratefully. 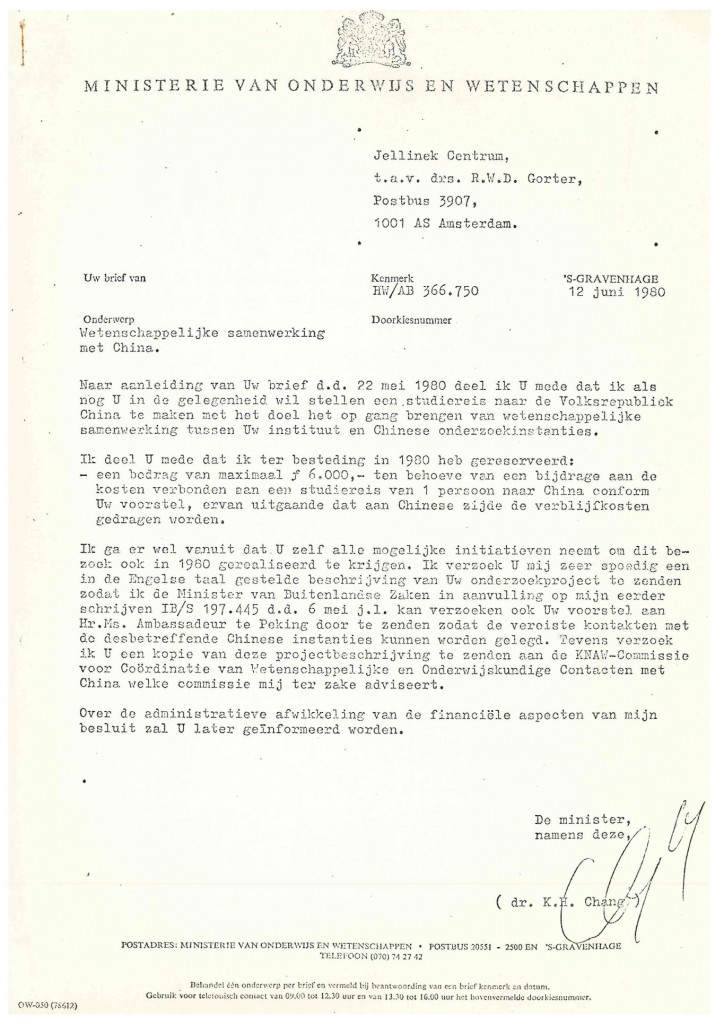 In this letter by the Ministry of Education and Sciences of the Netherlands, Robert Gorter was acknowledged to be chosen for the academic exchange program with the People’s Republic of China. 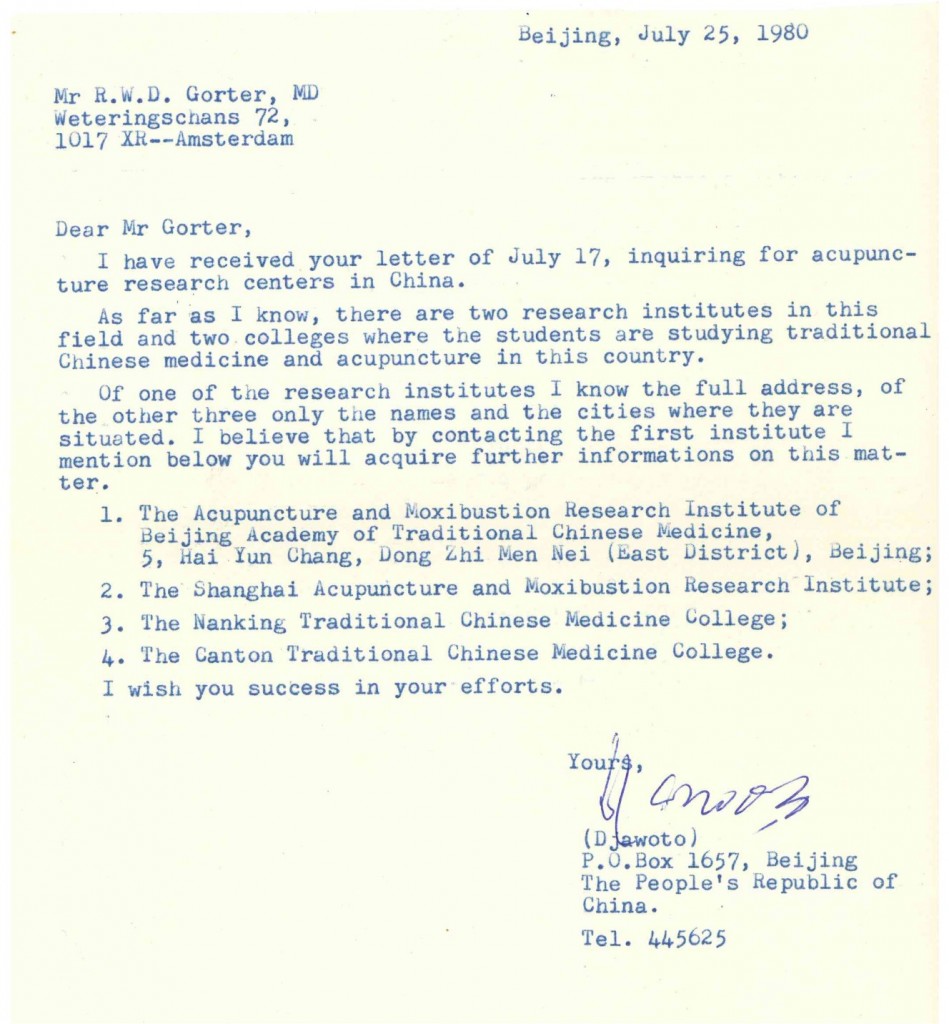 This letter was dated on July 25th, 1980, before Robert Gorter left for China. In this letter, it is confirmed which leading hospitals and universities would be visited 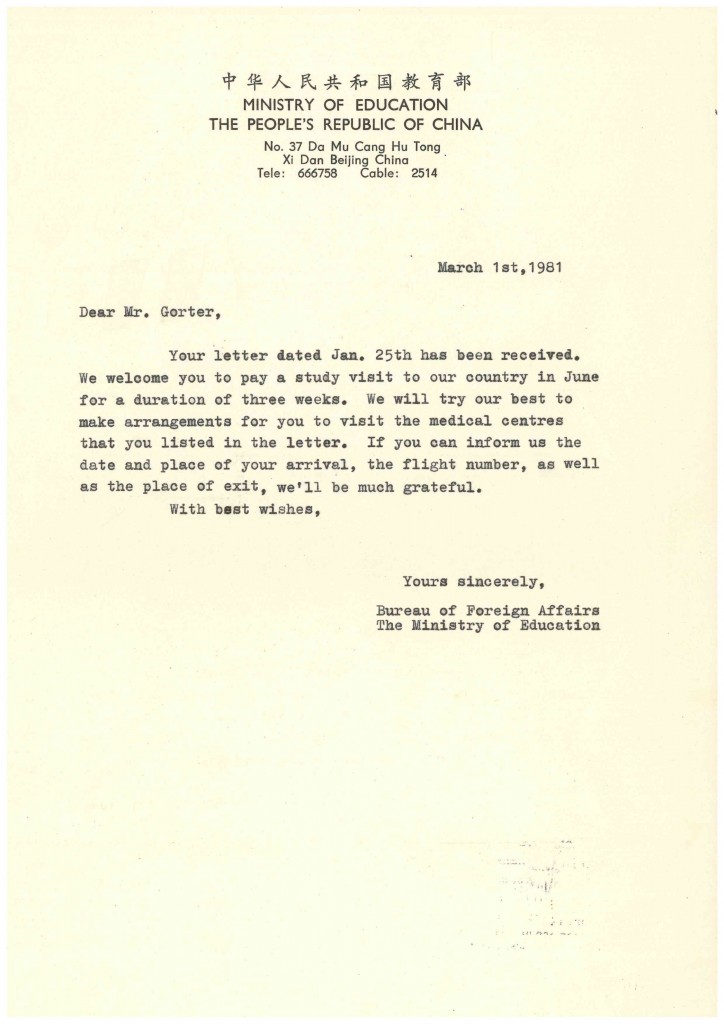 Dated on March 1st, 1981, Robert Gorter was invited for a three-week visit by the Minister of Education to visit the People’s Republic of China. The final trip to China took place in June & July, 1981.

In this envelope the letter of invitation by the Minister of Education in Beijing was delivered to Robert Gorter by regular mail.

Robert Gorter thus embarked on a KLM plane to Honkong in July of 1981 where he stayed three days before taking a hoover craft boat to Quanchu (Cantoon). Here he stayed one day and one night and then took a plane to Beijing (Peking). He remembers that the air conditioning in the plane was not functioning and everybody received a hand-foled fan which one could use by hand. It seemed that this was normal as the passengers did not seem to be disturbed by this. The temperature on board was unbearable for Robert Gorter but what could he do? Nobody spoke English.

Robert Gorter was received with full honors by representatives of the Ministry of Education at the airport of Beijing. Here, he met his translator for the following three weeks.

Robert Gorter had a busy schedule and he told us a lot about his experiences of which we remember a few and we will report here.

“Some professors were very famous as they had certain mixtures of plant extracts which would be very effective in cases like rheumatoid arthritis, diabetes or high blood pressure. The composition though was kept secret by the professor and when he died, he would take the secret with him into his grave.”