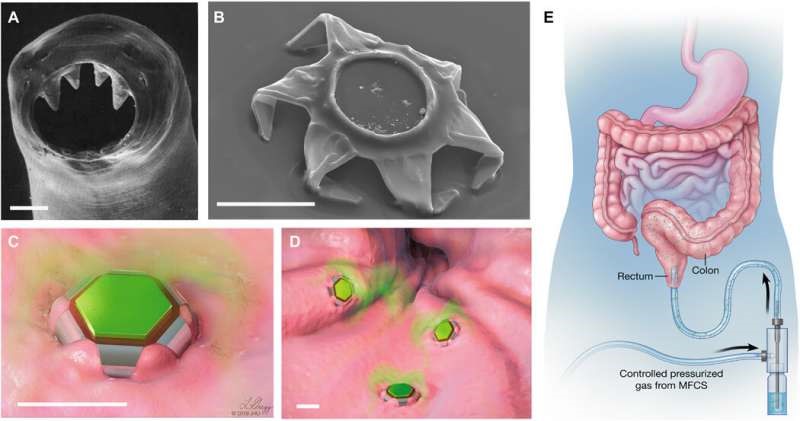 Shape-changing theragrippers as self-latching drug delivery devices. (A) Scanning electron microscopy (SEM) image of the ventricular teeth of hookworm A. duodenale. The worm uses these sharp teeth to penetrate the mucosa and adheres in the GI tract for up to 2 years. Reprinted from Human Parasitology, 4th Ed. Copyright 2013, with permission from Elsevier. (B) SEM image of a theragripper in the closed configuration. Like the hookworm, the theragrippers are equipped with sharp microtips. Schematic illustrations of (C) a single and (D) many theragrippers attached to the mucosal tissue and releasing encapsulated drug (colored in green). Scale bars, 100 μm (A to D). (E) Conceptual illustration of the rectal administration of drug-loaded theragrippers using a pressure-actuated microfluidic flow controller. Images (C) to (E) were illustrated by L. Gregg. MFCS, microfluidic flow control system. Credit: Science Advances, DOI: 10.1126/sciadv.abb4133

The online cover story of Science Advances this week features a conceptual gastrointestinal (GI) microdevice, developed by a research team for extended drug release. Drug delivery platforms for extended drug release have proven to be challenging to develop in bioengineering due to gastrointestinal (GI) tract movements and their resulting elimination from the body. In a new report, Arijit Ghosh and a team of interdisciplinary researchers in chemical and biomolecular engineering, gastroenterology and hepatology, materials science, drug discovery, and neurology at the Johns Hopkins University in the U.S. reported new drug-loaded devices bioinspired by the grip mechanisms of parasitic roundworms known as hookworms. The parasites can linger in the small intestine for prolonged timeframes feeding on the blood of their host. 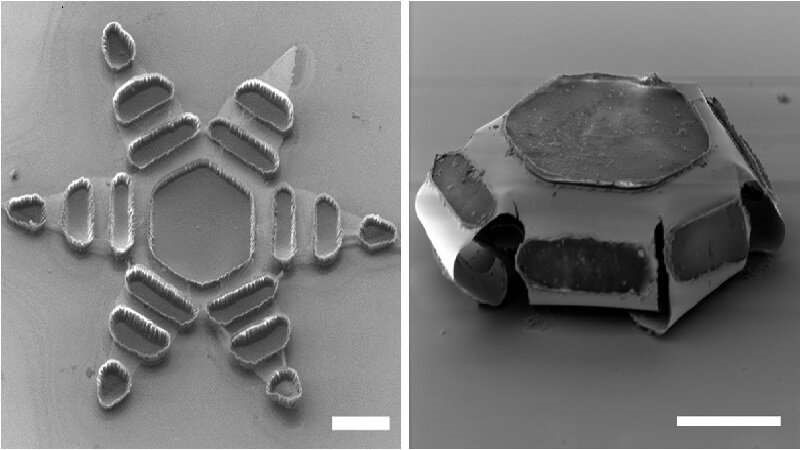 When an open theragripper, left, is exposed to internal body temperatures, it closes on the intestinal wall. In the gripper’s center is a space for a small dose of a drug. Credit: Johns Hopkins University

Ghosh et al. designed and developed a gripping construct they called theragrippers to dig their claws into the mucosal tissue of the intestinal tract. The devices performed gripping in response to body heat or other biological cues and released drugs into the GI lumen. As proof of concept, they showed how the devices clung to the GI tracts of live rats for 24 hours and demonstrated a six-fold increase in the elimination half-life of a non-steroidal anti-inflammatory drug used to relieve moderate pain. The work showed that the device assisted the drug to remain in the body for a significantly longer period of time. The work provides first-in-class evidence on self-latching microdevices to effectively improve prolonged and enhanced drug delivery.

Delivering drugs in the gastrointestinal tract 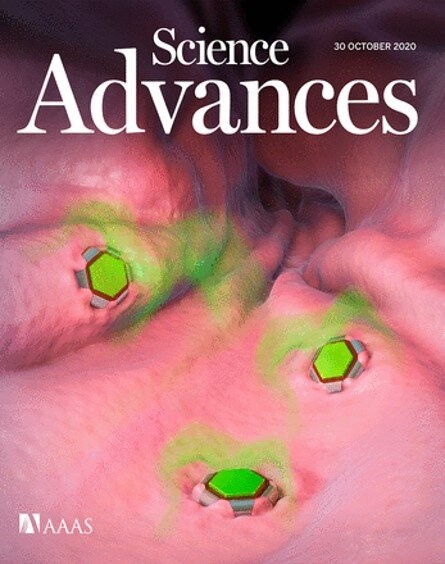 In this work, Ghosh et al. were inspired by the biomechanism of Ancylostoma duodenale (hookworms) that reside in the human intestine for up to two years. The work presented the first preclinical evidence of submillimeter-scale latching tools for enhanced drug release and retention in vivo. Drug administration through the gastrointestinal tract can improve compliance compared to injectables, resulting in better treatment. Drugs administered through the GI tract allow efficient absorption and systemic circulation due to the enormous intestinal surface area and rich vascularization of the GI tract mucosa. For example, scientists had previously developed mucus-penetrating particles (MPPs) for improved retention, although such devices were removed after a day due to clearance of the underlying mucus layer. An urgent need therefore presently exists to develop extended drug delivery systems.

To accomplish automated latching in the GI lumen, Ghosh et al. relied on the thermally triggered release of the device. They latched a drug-load patch onto the microactuators to deliver ketorolac (a pain reliever) as a model drug. The theragrippers were retained in the colon for 24 hours, allowing significant exposure to the drug, resulting in a 10-fold higher plasma ketorolac concentration 12 hours after administration. The proof-of-concept work validated the active, shape-changing, and self-latching theragrippers for extended drug release in the GI tract. The scientists used multiple sharp micro tips to design the theragrippers ensuring latching on to the GI mucosa much like hookworms. They capped the thick, rigid segments and bilayer hinges of the theragrippers with a thermosensitive wax layer. The surface paraffin or wax layer of the device softened at body temperature after implantation to autonomously trigger the claws inside the GI tract of the animal model.

The team used hybrid materials containing a metal-polymer made of gold and chromium and carrying a drug-eluting polymer patch for the controlled release of drugs. The adhesive strength of the drug-loaded polymer to the underlying metal scaffold prevented delamination (removal) of the drug patch during GI peristalsis. The materials were biocompatible without potential toxicity for drug delivery. The team selected the rectal route of device administration most common for pediatric patients and in therapeutic interventions for ulcerative colitis.

Ghosh et al. first tuned the porosity of the drug patch electrodeposited on the device to load and release drugs for 24-hours. They used ketorolac a U.S. Food and Drug Administration-approved, non-steroidal, anti-inflammatory drug as a model candidate with a high clearance profile (half-life of less than 3-hours) for in vivo experiments in a rodent model. The pore size of the polymer facilitated the release of substantial amounts of ketorolac at an acceptable rate, and the team used 250-µm-sized theragrippers for in vivo drug delivery in rats. The constructs were 32-fold smaller than the typical colon diameter in rats and weighed approximately 300 g. Ghosh et al. tuned the theragripper penetration by varying the parameters of the construct, and used the finite element method to estimate the force generated by the folding claws of the device. The team applied a constraint at the tip of the theragripper to prevent it from folding during the simulations and calculated the approximate pressure of each theragripper microtip on the colon—which was in the range of 0.4 to 0.6 MPa. The outcomes indicated their potential to exert sufficient pressure to break the mucosal barrier without damaging the colon.

Parallel fabrication of the theragrippers and they’re in vitro drug loading and release characteristics. (A) A functional block diagram illustrating the microfabrication steps for an array of theragrippers, showing the actuation layer, drug-eluting layer, and the thermoresponsive trigger. (B) SEM image showing theragrippers next to the tip of a 22-gauge hypodermic needle. The theragrippers are small enough to pass safely through the GI tract without causing any gastric obstruction. (C) SEM image showing a single 250 μm, as fabricated theragripper with the drug-encapsulated chitosan patch at the center and the paraffin wax trigger layer on the hinges. (D) High-resolution SEM image showing the surface morphology of the chitosan patch at the center of the theragripper. The patch has pores less than 100 nm in size. (E) Release characteristics of ketorolac (KT) from theragrippers of four different sizes. (F) Plot showing the relative scaling of the drug loading capacity of theragrippers of different sizes. The entire loaded drug gets released over a period of 24 hours. While the 250-μm theragrippers were used for our in vivo experiments in rats, larger 1.5-mm theragrippers can be loaded with about 100 times more drugs, for use in larger animal models and humans. Credit: Science Advances, DOI: 10.1126/sciadv.abb4133 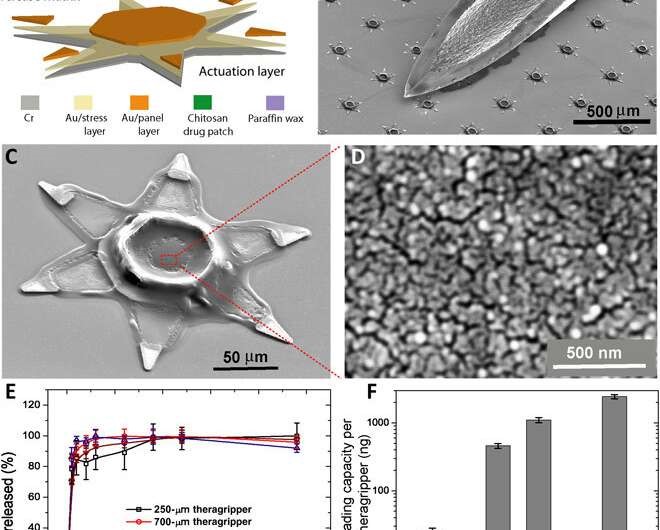 The team performed ex vivo (experiments on tissue conducted externally in a laboratory) theragripper attachment studies using rat colon tissue and visualized surface penetration using scanning electron microscopy (SEM). During in vivo experiments in rats, Ghosh et al. deployed thousands of grippers in a single shot by using a pneumatic microfluidic controller (PMC). The team delivered the drug deploying theragrippers intrarectally via a pneumatic delivery system to jugular vein cannulated rats. The rat colon appeared normal at the sites of attachment, indicating the absence of tissue damage or inflammation. The team also conducted similar experiments with a porcine (pig) model to understand theragrippers as a resident device in the upper GI tract. During these investigations, the device transited through the esophagus in less than a minute and remained attached to the colon for up to a day. All experiments demonstrated the safe elimination of the grippers from the body through natural mucosal turnover. Each theragripper contained approximately 23 nanograms of ketorolac for sustained drug concentrations and showed delayed clearance compared with pristine ketorolac.

Theragrippers can apply sufficient force to penetrate the mucosa. (A) The plot of the force generated by a theragripper as a function of the percentage of folding, generated by FEM. Each claw of the theragripper can generate a maximum force of around 0.6 μN per hinge. Insets show the simulated configurations at different stages of the folding process marked by red dots. The colors in the legend indicate the magnitude of the von Mises stress in the gripper. (B) Close-up SEM image of the tip of a theragripper, showing the cross-section of the tip having a width (W) of approximately 3.1 μm and a height (H) of 1.6 μm. To estimate the pressure exerted by this tip as the gripper actuates, we used the Hertz contact mechanics model and assumed the tip to be a sphere of diameter 1.6 to 3.1 μm. (C) Ex vivo experiment showing many theragrippers latching onto the colon of a rat. The inset shows the bright-field zoomed-in image of a single theragripper. (D) μ-CT image of the cross-section of a theragripper penetrating into the colon ex vivo. (E) SEM image of a theragripper latching onto the colon mucosa ex vivo. (F) Zoomed-in image of the red outlined region in (E), showing the penetration of the claw into the colon tissue. Credit: Science Advances, DOI: 10.1126/sciadv.abb4133

In this way, Arijit Ghosh and colleagues developed a versatile platform of thermoresponsive theragrippers for drug dispersion in smaller conduits within the body. The team markedly improved the performance by altering the geometry, hydrogel matrix, and drug formulation to observe drug release and the retention of grippers in the colon for 24 hours. Due to the thermoresponsive nature of theragrippers, the team will need to refrigerate the devices for immediate and long-term storage. They conducted proof-of-concept studies with the model drug ketorolac, which showed an increased half-life of almost 12 hours, the concept can be extended to other drugs. The new and versatile theragripper drug delivery system is based on self-latching in live animals and presents a new paradigm in drug administration. 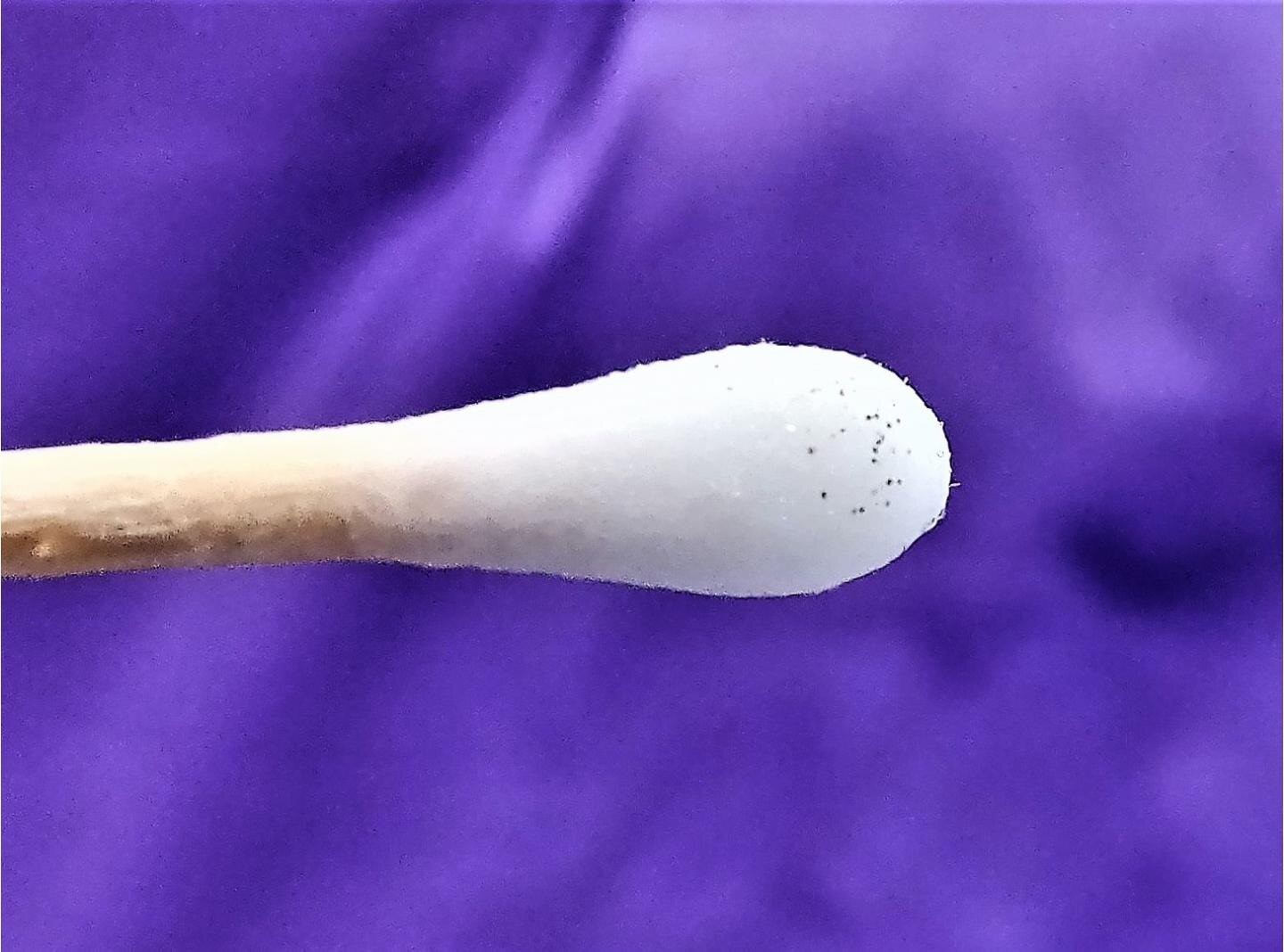 A theragripper is about the size of a speck of dust. This swab contains dozens of tiny devices. Credit: Johns Hopkins University.