There’s a new slur trending in Turkey these days, aimed at the LGBTQ population: “#YallahHollandaya,” or “Go to Holland.” The expression reflects the Netherlands’ longstanding acceptance of homosexuality, having been the first country to legalize gay marriage. Also, since the Netherlands become the only republic in Europe in 1477 AD (and without a Head of State) homosexuality was maybe not trendy but never a crime and prosecuted.

The Dutch Republic was a federal republic formally established from the formal creation of a federal state in 1581 by several Dutch provinces—seceded from Spanish rule—until the Batavian Revolution of 1795. It was a predecessor state of the Netherlands and the first fully independent Dutch nation-state.

The small republic of around 1.5 million inhabitants distinguished itself by world trade through the Dutch East India Company (VOC) and the Dutch West India Company (GWC), by its military campaigns against countries such as Spain and England, by its huge fleet (with 2,000 ships, larger than that of England and France combined), by the flourishing of arts (painters such as Rembrandt, Johannes Vermeer, and many others) and sciences (including Hugo Grotius and Antonie van Leeuwenhoek), and by its very tolerant atmosphere towards different religions and ideas (freedom of thought). Because Dutch trade, science, military, and art were among the most acclaimed in the world during much of the 17th century, this period became known in Dutch history as the Dutch Golden Age.

But tell that to the gays in Holland or at least, those who venture in certain neighborhoods of Amsterdam where, in early April, two men walking hand in hand were attacked verbally and physically by Muslim youths. Calling the couple “kankerhomos” (“cancer gays”), the boys shoved the men before spitting in their faces – a particularly dangerous assault in the time of the coronavirus pandemic.

That at least one of the rogue boys was of Turkish heritage, however, would seem to have been welcome news to Turkey’s leadership and its official religious arm, the Diyanet. Only days after the Amsterdam incident, Religious Affairs Chairman Ali Erbas declared that Islam condemns adultery and “curses homosexuality,” which, he asserted, “causes illnesses and withers the generation.” 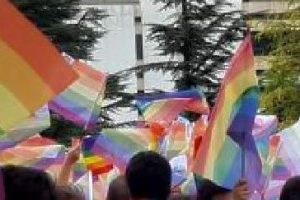 His statement was quickly supported by Turkey’s President Recep Tayyip Erdogan: according to Sharia, gays must be stoned to death or thrown off a tall building.

Both these incidents took place around the same time that Sofia Talon, a transsexual Moroccan woman now living in Turkey, began outing gay Moroccan men on her popular Instagram channel, which boasts over 600,000 followers. Homosexuality is illegal in Morocco.

In her Instagram Live broadcast on April 13 – coincidentally the same day of the Amsterdam attack – Talon called on Moroccan women to set up fake accounts on gay chat sites and codified apps like Grindr, which gays frequently use to remain invisible to the authorities. Leaked photos of members of those groups quickly began circulating on social media, leading to death threats and calls to attack gay men – just as coronavirus-mandated lockdowns kept them trapped in their homes, many of them with religious, homophobic families. With hotels closed and travel limited, gay men have little possibility to escape – and because homosexuality is illegal, they will also find no support from lawmakers in the event of an assault.

Talon’s campaign appears to have been personal, not religiously based. “They started this war because I am successful on various social media platforms and Moroccans started sympathizing with me,” she later defended herself to the Moroccan Times. “They put my life at risk.”

But the religious prejudices of Moroccan Islamists have, thanks to her vendetta, but the lives of thousands of gay men at risk, as well.

In Turkey, what began as a religiously-based speech soon became a political issue, as Erdogan rushed to defend Erbas from criticism and from a lawsuit filed by the Ankara Bar Association, which accused him of inciting hatred. “An attack against the Diyanet chief is an attack on the state,” Erdogan stated. “What he said was right.” A spokesman for Erdogan’s AKP party further posted on Twitter that Erbas had “voiced divine judgment.”

For its part, the Ankara Bar has accused Erbas of “receiving a salary in exchange for ignoring child molesting, for trying to legitimize the spiritual ground of misogyny with religious discourse,” and warned that “it should not surprise anyone that in [Erbas’] next speech he invites the people to burn women in the squares with torches in their hands.”

In response, the public prosecutor’s office announced an investigation against the Bar “for the crime of ‘insulting the religious values adopted by a part of the people,” Turkish newspaper Hurriyet Daily reported.

Neither side of this debate has addressed the potential danger the “causing illness” accusation poses to the gay community at a time when a pandemic is spreading across the globe. For the moment, there have been fewer actual acts of violence in Turkey, thanks largely to the lockdown, according to Arie Akkermans, a gay art critic living in Istanbul.

“The [larger] point is the question of gay rights in Turkey and the Muslim world at large is always tense.” he said, “because there are less and fewer rights now than there were seven years ago, less visibility … so whenever these kinds of things emerge, people are afraid that they will come to policies and arbitrary decisions.”

Still, the recent events have had some positive ramifications,” Akkermans noted. “If you follow the Turkish conversation on Twitter, there is always a clear degree of homophobia, or at least animosity towards gays and so on, on a certain level. This kind of thing makes the conversation wider… it’s a mainstream topic now in media. But as with the rest of minorities, I believe LGBT doesn’t want to be at center stage. Those things usually end up not well.” 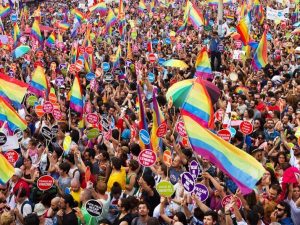 Recently, the ban of any demonstration was implemented by the governor’s office in Ankara on Sunday, citing fears they would “provoke hatred and hostility” and pose a threat to “public order”. This includes film festivals, exhibitions, forums, and interviews – the ban arrives following the imposed cancellation on German queer film festival Pink Life Queerfest last week, due to supposed public safety issues. Mehmet Kiliclar, Ankara’s governor, outlined in a statement that the ban would ‘prevent crime’ and encourage “general health and morals”.  Turkish President Recep Tayyip Erdoğan previously described such LGBTQI events as “against the values of our nation”.

Few people understand that better than human rights activists, who have seen attacks on minorities, occur across the globe. Yet some who have been quick to defend gays and other minorities elsewhere have remained oddly silent in the face of the recent attacks in European Muslim communities and events in Turkey and Morocco. Minnesota Congresswoman Ilhan Omar, for instance, who in the face of attacks on Palestinian gays last summer tweeted, “LGBTQ rights are human rights, and we should condemn any effort to infringe upon them,” has managed to ignore the recent spate of events in Turkey and Morocco – as have officials at the Council on American-Islamic Relations (CAIR).

In the wake of 2016’s terrorist attack at Orlando’s Pulse nightclub, CAIR Executive Director Nihad Awad called a news conference to condemn the attack, which he called a hate crime. Omar Mateen stopped in the middle of killing 49 innocent people to call 911 and inform the world that he was an ISIS attack.

The LGBT community has been an ally to American Muslims “for many years,” Awad told reporters. “Today, we stand with them. Shoulder to shoulder. The liberation of the American Muslim community is profoundly linked to the liberation of other minority groups; blacks, Latinos, gay, Jewish, trans, and every other community that has faced discrimination and oppression in this country.”

It sounds good. But CAIR’s actions don’t meet the rhetoric.

CAIR calls itself a human rights organization. Yet it has regularly featured radical imam Omar Suleiman at its fundraisers – the same Omar Suleiman who in 2013 posted to his Facebook page: “When Allah describes homosexuality as a repugnant, shameless sin and details his punishment of a people that practiced sodomy, how can anyone who believes in Allah not find it immoral?”

Another frequent CAIR speaker and former advisory board member, Siraj Wahhaj, has voiced similar views: “Over 25 million Americans… are men who prefer men, and women who prefer women,” he said. “No matter how much the American government and the Canadian government accept [homosexuality] as the law, it will never be accepted by the Muslims. Do you know what the punishment is if a man is found with another man? The prophet Mohammed says… the one who does it and the one to whom it is done, too, kill them both.” 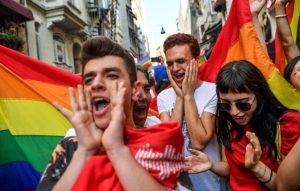 According to Sharia law, any gay (maybe also lesbian) should be stoned to death or thrown off a high building

Other so-called human rights activists have also cozied up to the two homophobic Islamists. Michigan Congresswoman Rashida Tlaib, who has shared a stage with Suleiman at various CAIR events, has also expressed her support of his ideas on Twitter; and anti-Israel activist Linda Sarsour declared that Suleiman made her “more proud to be a Muslim and a Palestinian.”

Suleiman, it should be noted, has also called for a “third intifada” against Israel.

But CAIR, led by Awad, has aligned itself with Erdogan’s rule and routinely ignores human rights abuses inside Turkey. CAIR’s unwillingness to call out anti-gay hatred from Turkey’s leadership is consistent with that blind support.

For her part, Omar also boasts a longstanding alliance with Erdogan. Indeed, a strong Erdogan ally, Turkish-American physician Halil Mutlu, is said to have contributed $1,500 to her campaign last September – just as she became the only Democrat in Congress to vote against imposing sanctions against Turkey over its attack on Syrian Kurds. Also, Omar was one of only two Democrats not to condemn Turkey for the Ottoman Empire’s Armenian genocide, voting “present.”

In both cases, she objected to the concept of sanctions in principle, despite being an ardent supporter of the Boycott, Sanction and Divest (BDS) movement against Israel.

Whether this explains her silence in the face of the Diyanet leader’s statement is difficult to say. Certainly, it doesn’t explain the failure of CAIR, Omar, and other Islamist “human rights” activists to defend the gay community against attacks in Turkey, Europe, USA, Morocco, and elsewhere.

Abigail R. Esman is a freelance writer based in New York and the Netherlands. She is the author of Radical State: How Jihad Is Winning Over Democracy in the West (Praeger, 2010). Her next book, Rage: Narcissism, Patriarchy, and the Culture of Terrorism will be published by Potomac Books in October 2020. Follow her at @radicalstates.