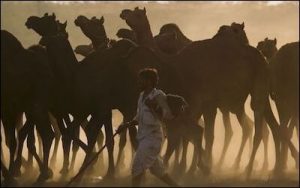 Muslim advocacy for drinking camel urine is back in the news, this time in connection with the coronavirus, which is especially ironic if not deadly, as will be explained. An “Islamic medicine specialist” and director of a religious-scientific institution in Iran recently called on his countrymen to drink camel urine as the “best cure” for coronavirus and other ailments.

Mehdi Sabili, who is affiliated with the Iranian regime, uploaded a video on his Instagram account extolling the virtues of dromedary urine on April 19, 2020. The video, which has since gone viral, also depicted him drinking a glass of freshly procured camel urine — which he enthused was best drunk “fresh and warm” — and calling on fellow Iranians to do the same three times a day for three days (i.e., nine full glasses).

Where does this idea come from? As usual and with everything Islamic, the drinking of camel urine for salutary benefits is traced back to Muhammad (and, for Iran’s Shias, subsequent imams). According to canonical hadiths or traditions, the prophet medicinally prescribed the ingestion of dromedary urine.

The drinking of camel urine for salutary benefits is traced back to the Prophet Muhammad.

Somewhat relatedly, Muhammad’s own urine — which some of his followers eagerly drank — was and continues to be considered a great and salutary blessing, one that even safeguards against the fires of Hell: Inshallah. 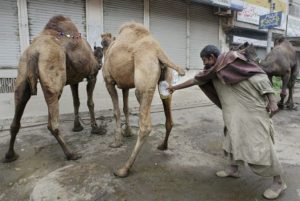 For faithful Muslims such as Iran’s Sabili, because urine-drinking — in this case, camels’ — was recommended by the prophet, it must remain applicable, regardless of what “science” has come to say on the matter. Such is the totalitarian nature of Islamic law, or sharia, which treats not just the Koran, but canonical hadiths as sacred and not to be questioned.

Nor is this some sudden, desperate response to the coronavirus. For example, back in 2012, Dr. Zaghlul al-Naggar, a prominent Islamic thinker and the chairman of Egypt’s Committee of Scientific Notions in the Koran, revealed on a live television show that a medical center in Marsa Matrouh actually specialized in treating people with camel urine — all in accord with the prophet’s advice. When another guest challenged al-Naggar, saying urine is where all the body’s toxins are carried out — “so, shall we drink it for health?” — the representative of “Islamic science” responded with arrogance: “I am older than you and more learned than you: you are not going to teach me; I will teach generations of people like you.”

A few months later, in late 2012, a video appeared showing men collecting camel urine in buckets and giving it to people who, in the narrator’s words, are “looking to be healed from influenza, diabetes, infectious diseases, infertility,” etc. Several women were shown drinking the camel urine — and doing all they could to keep it down and not vomit. The Egyptian narrator concluded by saying he is airing this video not to mock or revile, but to determine “whether we are moving forward, or whether we are moving backwards.”

Indeed, such is the tragedy. Not only is drinking camel urine not beneficial, but it appears to have been directly linked to a coronavirus outbreak: in 2012, only Saudi Arabia — the home of Islam and its holy cities — was plagued by another form of coronavirus (MERS-CoV, AKA “Camel Flu”). A whopping 40% of the more than one thousand Saudis who contracted it died. One of its causes, which the World Health Organization strongly warned against, was the drinking of camel urine. 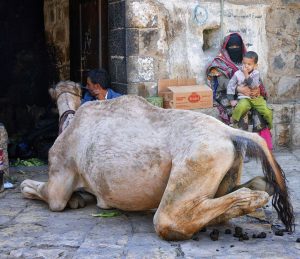 Relying on other forms of “sharia medicine” — for instance, “inserting velvet oil into the anus” to combat coronavirus — has also led to casualties. In Iran alone, a coronavirus patient who was told by a cleric to smell roses as a cure died soon thereafter, and the son of a prominent ayatollah confessed that his father had died because he had trusted so-called “Islamic medicine specialists.”

In the end, the mentality that extols the ingestion of camel urine is the same mentality that calls for “jihad against infidels.” Both are defined by blind obedience to the utterances of Muhammad — just as both lead to suffering: physically, mentally and spiritually (karma).

Camel urine has been used in the Arabian Peninsula for medicinal and religious purposes for centuries, being a part of Islamic prophetic medicine. The World Health Organization has urged people to stop drinking camel urine. It has been linked with Middle East Respiratory Syndrome Coronavirus.

In the tradition of prophetic medicine in Islam, Muhammad is said to have encouraged its use among the sick “till their bodies became healthy.” The hadith also states “Some people of ‘Ukl or ‘Uraina tribe came to Medina and its climate did not suit them … So the Prophet ordered them to go to the herd of (Milch) camels and to drink their milk and urine (as a medicine). … So they went as directed and after they became healthy.”

Bachtiar Nasir, an Islamic cleric, advocated for and defended the consumption of camel urine, quoting the hadith. Abu Yusuf, a student of Abu Hanifah, said that there is no harm in using camel urine for medical treatment.

In Yemen and the Middle East at large, it is used for treating various ailments. Some salons are said use it as a treatment for hair loss. The camel urine from a virgin camel is priced at twenty dollars per liter, with herders claiming that it has special curative powers. It is traditionally mixed with milk.

In 2009, researchers from King Abdulaziz University argued that camel urine could be used to treat eczema and psoriasis. In February 2013, the same researchers “claimed they had extracted a substance called PMF701 from camel urine that could be used to treat cancer.” But no controlled studies or even observational studies have ever been published.

The World Health Organization (WHO) has said that camels can transmit Middle East respiratory syndrome-related coronavirus to humans and has urged people who have “diabetes, renal failure, chronic lung disease, and immunocompromised persons are considered to be at high risk of severe disease from MERS-CoV infection” to avoid contact with camels, drinking raw camel milk or camel urine, or eating meat that has not been properly cooked.

*Robert Gorter, MD, PhD, was/is professor at 6 universities in 3 continents at the same time. He spent extensive time in sub-Sahara Africa and the Middle East and went on missions for the WHO.